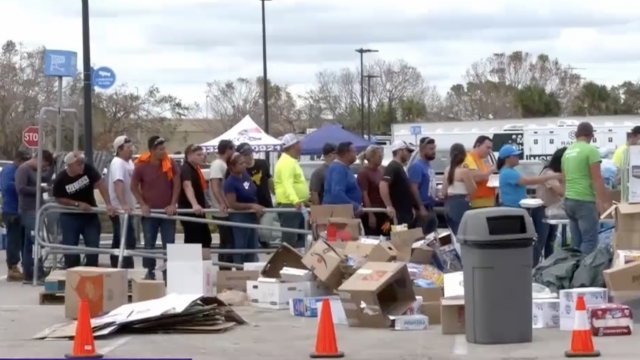 Immigrant workers are at the center of a multibillion-dollar disaster recovery industry helping clean up after Hurricane Ian.

It's been nearly two weeks since Hurricane Ian made landfall in Florida. And as towns hit hard by the storm start to rebuild, messages advertising repair jobs have been popping up across Whatsapp groups and online platforms.

Javiel is only two days into his job near Fort Myers.

NEWSY'S AXEL TURCIOS: What type of work do they have you doing?

He arrived from Dallas along with other Venezuelan migrants looking to work in the reconstruction of southwest Florida. Javiel is seeking asylum in the U.S. after he crossed the Mexico-U.S. border two weeks ago.

JAVIEL: You see all sorts of things on the journey, dead people. It's tough.

TURCIOS: Was it worth it?

JAVIEL: Yes, it was worth it.

Experts say dozens and even thousands of migrants will be arriving in the state to help repair properties, putting their lives in danger for little pay.

Found Cleaning Up After Hurricane Ian: A Stranger's Memories

A homeowner cleaning up after Hurricane Ian found an album of a stranger's photos.

Fernando Zucato is the owner of a roof tarp company. He said he's seen the advertisements targeting recently arrived migrants, people who are prone to exploitation, scams and no pay.

"Some companies, yes, they're going to take advantage. They hire the guys for three weeks, checks never come," said Zucato.

Zucato says these people become victims of misinformation because their need for urgent jobs makes them fall for almost anything.

"I heard so many stories that they threaten people. If you try to do anything bad to me, I'm going to call immigration on you," said Zucato.

Jesus Duran is also from Venezuela. He made his way to Florida to work on rebuilding the destroyed areas.

TURCIOS: You've been working for two days now, it's hard work. You're going to be working for several days possibly. Are you afraid that they might not be trustworthy?

JESUS DURAN: Sure, of course. Because you must work because you need to, otherwise you won't work. They must pay me. They should pay me, right?

TURCIOS: How much are you getting paid?

Immigrants from Mexico, Honduras and Guatemala have historically been the backbone of the recovery workforce in regions slammed by natural disasters.

This time the new waves of migrants are comprised of Venezuelans, Cubans and people from Central America. The same migrants are being bussed and flown to sanctuary states in the northeast from Texas by Florida's Governor Ron DeSantis.

While the governor has not spoken about these migrants coming to work in Florida, he encouraged companies in the state to hire locally.