Republicans Are No Longer The Second-Largest Voting Bloc In California 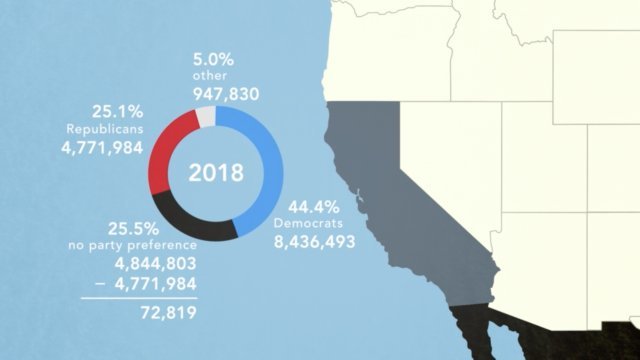 Voters in California weren't the biggest fans of then-candidate Donald Trump during the 2016 presidential election. In fact, he received 31.6 percent of the state's popular vote — less than any other Republican candidate since the 19th century. His popularity there hasn't changed much. As of April 2018, he had a net approval rating of -27.

Considering how Californians feel about the president, some GOP candidates, like John Cox, have tried to separate themselves from him ahead of the June 5 primary — even after receiving his endorsement. But the party might have more to worry about.

Out of the 19 million voters in California, independents now outnumber Republicans by 73,000, according to a recent analysis — making them the second-largest voting group next to Democrats.

But the number of voters who identify as Democrats has fallen slightly, too. Before the 2016 election, 44.92 percent of California voters were registered Democrats; now that number has dropped to around 44.4 percent.

So while the Democratic Party is in the lead among affiliated California voters, it has the same problem the Republican Party has. The main difference is that California's Democrats hold a lot more seats in Congress than its Republicans do, and the state has more potential toss-up races than any other in the upcoming midterm elections.