Micro-Transit Could Improve Cities — But Consumers Have To Want It 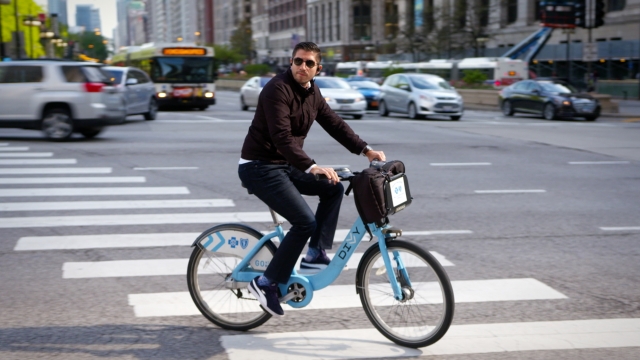 SMS
Micro-Transit Could Improve Cities — But Consumers Have To Want It
By Lindsey Theis
By Lindsey Theis
May 24, 2019
The success of alternative mobility options depends on the public having a good experience.
SHOW TRANSCRIPT

As alternative transit like ridesharing and scooters get more popular, they could improve lots of different aspects of city living, from career prospects to congestion issues to the impacts of climate change. At the Smart Cities conference in New York, experts told Newsy they think they're only going to take off if they're presented to consumers properly.

"If I can't get to work on time. They're not going to give me a raise. They're not going to give me a promotion," Karina Ricks, Director of the Department of Mobility and Infrastructure for the City of Pittsburgh tells Newsy. "Buses, a lot of the traditional kinds of transit, you either have to really set out so much earlier, so that you're buffering in any kind of delay that you might experience there or you know you're you're running the risk of being late. And that's really a huge problem for people who are early on in their careers. People maybe who are overcoming some other hardship."

"There's so much money being poured into mobility. I think over the past ten years, 111 billion dollars. And everybody has great ideas to help solve the problem of congestion and higher emissions and more vehicle miles traveled," Karin Maake, Communications Director for Flash Parking said. 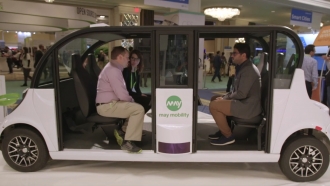 CES Asks: How Do You Get Someone To Want More Self-Driving Cars?

"We unequivocally believe that climate change is real and that we have less than 10 years to make really profound changes in the way that we move around if we are going to avoid catastrophic global climate collapse," Ricks said.

"London by their own calculations have said that they're saving somewhere in the area of 100 million pounds a year, because of … their ability to leverage standard infrastructure for these payments," Miguel Gamino, Executive Vice President, Head of Global Cities, Enterprise Partnerships for Mastercard said.

Some micro-mobility options, like e-scooters, have shown a lot of promise with consumers so far. Gamino predicts that trips with different micro-mobility legs could get even more popular, especially if users can pay for them all in the same way.

"The idea that someone can take a bike to the train station, take the train you know to another destination, and then perhaps take a scooter or a ride share, or a car share, or whatever whatever those modes might be that make the best sense, giving people one ticket, one payment for that multi-modal journey," he said.

Some of these newer modes still come with safety concerns, though. Uber just recently put its self-driving cars back on the road after one of them killed a pedestrian in Arizona in 2018. And the CDC tells Newsy it's investigating scooter-related injuries in Austin, Texas.

The CDC Is Investigating E-Scooter Injuries For The First Time

Experts think the next generations of scooters could be improved to better fit their environments.

"It's not clear that they were really designed to be on proper roadways it's not clear that they were designed to go 20 miles an hour. They seem a little flimsy. They have trouble with potholes. You really need to have a good sense of balance on them. So we do need those vehicles to iterate also and to understand and respond to the environment that they're in,"  Ricks said. "In Pittsburgh we have a number of brick and cobblestone streets still. I can't imagine taking one of the existing scooters those streets. However, put some larger tires on it. Maybe a little bit of a wider tread. Maybe a wider platform on it. It would be great."

Bird, an e-scooter company, says it's a matter of making the roads safer for rides. Ashwini Chhabra, head of public affairs for Bird, spoke at the Smart Cities conference. Bird also shared with Newsy its own safety report from April 2019. It said injuries vary substantially between cities, but they seem to match up well with a city's bike safety scores.

"If you look at absolute numbers, definitely an uptick in the number of injuries, but you went from basically zero scooter rides in 2017 to millions of square rides. So in our first year we did 10 million rides, so you're going to see more injuries as a result. If you look at it as a percent of the total number of rides. It's not actually a different risk profile from biking,"Chhabra said.

At the end of the day, getting individuals on board may be the biggest challenge. In the last few years, only a handful of cities have seen increased use of their public transit. Gamino thinks the positive health implications might not be enough of a selling point on their own. Successful mobility solutions will have to make leaving the car behind seem worthwhile.