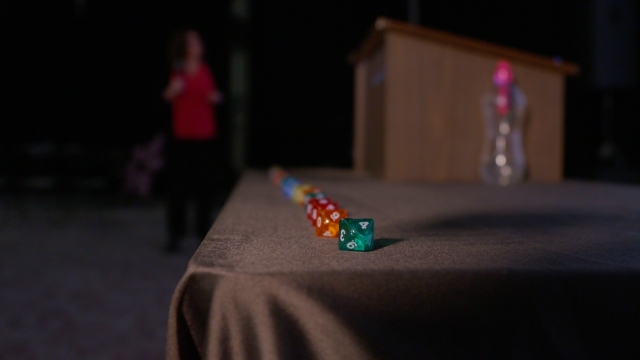 These people aren’t playing Dungeons and Dragons, or any other game. They’re mainly volunteers spending a Thursday afternoon rolling the dice in the hopes of strengthening Michigan's election infrastructure. It's through a new trend called a risk-limiting audit.

Instead of hand-counting every paper ballot to check election results, risk-limiting audits allow election workers to scrutinize a random sample. Volunteers roll dice to make a random 20-digit number that gets plugged into software. The tool calculates how many ballots to examine and which ballots to pull from the bags. The randomness of the dice roll helps safeguard against bad actors trying to influence the audit.

Election experts say this method  can show if a counting mistake or cyberattack affected how machines tallied people’s votes, ensuring that the reported winner of an election really is the winner -- while also saving time and resources.

Michigan had the slimmest margin of victory for President Trump, making it a crucial state for 2020.

But there were some difficulties that day in 2016. The Detroit News reported that 59% of precincts in Detroit had ballots that conflicted with voting machine reports, and a city official told the paper that dozens of optical scanning machines faltered.

Now the state is getting ready for November with audits like this one, taking place after a city council race in Lansing.

"Anytime we're getting them to try something new, it's really about building their confidence, which is why pilots like these are so important," said Monica Childers, a project manager at VotingWorks. "It's a safe space to try something new, to practice the process, to get good at it before it really matters, before a big election like 2020."

"So these are the absentees that we're taking up. We're going to start with these up there so that our teams can get rolling while our staff grabs based on what was pulled," said Lansing city clerk Chris Swope.

About 10 volunteers came together. They were counting ballots, recording information, and getting ready for 2020.

Election experts have widely praised risk-limiting audits as a new gold-standard, and states have begun to listen. Colorado and Rhode Island already require them, and other states like Indiana and New Jersey have been testing the method.

But other experts think the risk-limiting audit is being oversold -- like it’s inventor, Philip Stark. He recently slammed Pennsylvania’s pilot as “lipstick on a pig.”

"The lipstick on a pig complaint is, ‘Great. You did it. You did a lovely job of tabulating paper that might have absolutely nothing to do with the winner, with how people voted,' said Philip Stark, a statistics professor at the University of California-Berkeley.

Stark says a crucial step is overlooked: verifying that votes people cast on screens match what gets printed out by machines called ballot-marking devices. The technology between the voter and the printed record is vulnerable to cyberattacks, bugs, and configuration problems that could mar that precious paper trail.

He says his first paper about risk-limiting audits avoided the issue, and that he didn’t know the machines would become so popular.

This vulnerability caught the attention of Congress during a recent hearing on election security.

“To be blunt, it’s a widely recognized, really indisputable fact that every piece of computerized voting equipment in use at polling places today can be easily compromised," testified Matt Blaze, a computer science and law professor at Georgetown University.

Election security remains a top issue for voters ahead of the next presidential election. A recent Newsy/Ipsos poll found 81% of Americans have at least some concerns about foreign interference. And 79% are at least a little worried about voter fraud.

But Bernhard says concerns about the security of an election’s paper trail is overshadowing other problems. Like the cyber actors linked to Russia who targeted and penetrated voter registration databases in 2016.

"No election is perfect and it never will be," Bernhard said. "So I think this is a good step forward."

In Lansing, the day of the pilot ended late but with success.

"Overall it went great. We exceed our risk requirement so we verified statistically that the two winners in at-large city council were the actual winners," Swope said.

But in Michigan, a December report from its Auditor General found that 21% of the state’s counties, cities, and townships lack a fully accredited election official -- leading to questions over how prepared they will be come November.

"Everybody kind of believes in the process," Swope said. "Everybody believes in voting and wants to make sure that our elections are accurate and reflect the will of the voters."