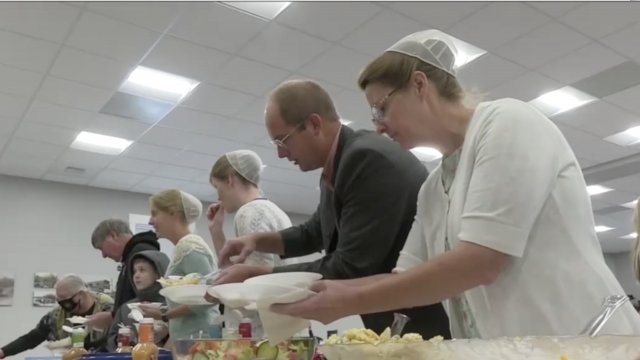 SMS
Michigan Community Welcomes Home Family Kidnapped In Haiti
By Marisa Orbele
By Marisa Orbele
January 3, 2022
The family was among 17 people kidnapped by the 400 Mawozo gang in October while in Haiti for a mission trip with Ohio-based Christian Aid Ministries.

Hart, Michigan, has welcomed home a family of Christian missionaries who were kidnapped in Haiti. A luncheon and prayer service was held Sunday afternoon for the family that attends Dunkard Brethren Church in Oceana County.

In October, members of the 400 Mawozo gang in Haiti abducted Cheryl Noecker her five children — Brandyn, Kasondra, Courtney, Sheldon and Cherilyn, who range in age from 6 to 27 years old — along with 11 others after they visited an orphanage in Port-au-Prince while on a mission trip with Ohio-based Christian Aid Ministries.

In an interview during Sunday's event, Cheryl's husband Ray Noecker said a negotiated ransom was paid on Dec. 5 to release all of the hostages, but a division within the gang resulted in only three people, including his wife and youngest son, to be released the next day. Ray said he did not know who paid the ransom or how much was given.

According to the church, Cheryl and Sheldon were released Dec. 6. The four others made a daring escape a few weeks later, walking for miles until they came across help.

The Noecker family returned to west Michigan on Thursday after spending time with family for the holidays. Ray said the family plans to rely on their faith to navigate the next few weeks and months.

"We feel like God is in control of our life and we want to be doing His will," Ray said. "One of the things that reassured me when my family was in captivity was I knew that God had called us and wanted us to be in Haiti. I had originally intended to go and do some discipleship teaching with Christian Aid Ministries teaching Haitian pastors. I was supposed to do that for six weeks but only was able to do that for two. I realized that God had a purpose bigger than my teaching, he had a work for my family to do."

Ray said this was his family's first trip to Haiti, but they had previously served as missionaries in Kenya for seven years. Ray says he believes the family will eventually return to service work, but right now they're continuing to adjust, while focusing on their faith.

"We live each day with a level of risk," Noecker said. "Things can happen no matter where we're at. We also need to look at the needs of the world around us."