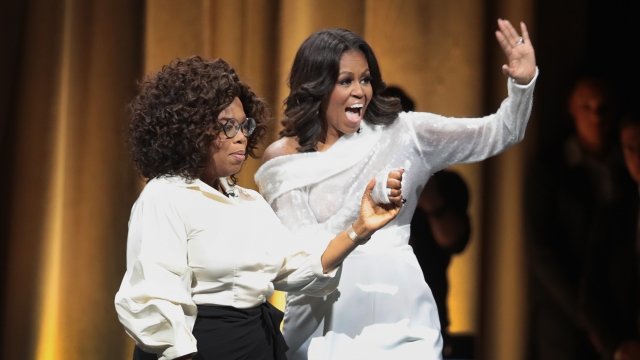 Former first lady Michelle Obama is set to embark on a two-month, 10-city book tour to promote her new memoir.

First stop: Chicago, Illinois. Michelle Obama has been all over the city this week stopping by her old high school, city block and favorite book store before she heads to the United Center to chat with another Chicago icon, Oprah Winfrey, about her new book "Becoming."

After finishing up at the bookstore, the former FLOTUS sat down in front of thousands of Chicagoans for the main event — a 2-hour chat with Oprah Winfrey about her new book.

The conversation covered marriage, parenthood, being the first black first lady and, of course, living in the White House.

"People ask, do I miss the White House. It's like, no, I don't miss the house because we took what was important in that house with us. It's family, it's values, it's the friendship. So the house is beautiful and it's historic and, you know, it was an honor to live there, but the people in it make it what it is," Obama said.

Now that the Chicago portion of the book tour is over, the former FLOTUS heads to Los Angeles to chat with Tracee Ellis Ross, followed by her next stop Washington, D.C., where she'll sit down with Valerie Jarrett.

"Becoming" is currently the top seller on Amazon and has drawn more pre-orders from Barnes & Noble than any adult book in three years.