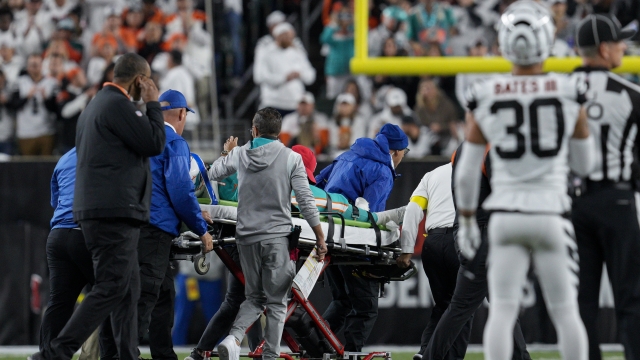 The Miami Dolphins and the NFL are under intense scrutiny after a frightening head injury to star quarterback Tua Tagovailoa.

Tagovailoa was tackled in the backfield. When he spun around, the back of his head hit the turf. As he turned over after the hit, his fingers seemed splayed in an awkward position.

"That's how brain injuries occur, how concussions occur," Dr. Julian Bailes said. "They're stretching, tearing of fibers, and so forth."

Dr. Bailes is a neurosurgeon at Northshore University Health System and one of the country's leading researchers on concussions. He was also a team doctor for the Pittsburgh Steelers for 10 years.

"That's a bad mechanism because the head is falling back," Dr. Bailes said. "Usually you can't brace your fall because you can't really see it, and your arms are not behind you. The back of the head hits, in this case the ground, and the brain moves back and forth or sloshes. So, that's a very likely mechanism for someone, especially in football, to sustain a concussion."

Tagovailoa played Thursday after only four days off. During the Dolphins' Sunday game against the Buffalo Bills, Tagovailoa hit his head on the ground, then stumbled on his way back to the huddle.

Tagovailoa's injury on Sunday made many question whether he should have been on the field at all.

"That's a lot of football to play in four days or five days, so I guess there's a trade off," Dr. Bailes said. "It's just a trade off for player safety and exposure and not just brain injuries, but joint injuries and other things."

The Miami Dolphins say Tagovailoa passed concussion evaluations on Sunday and concluded his stumble was due to a back injury.

"This decision is not made by one person, so it's not the team doctor only who is involved in the evaluation," said Dr. Allen Sills, NFL chief medical officer. "There is an independent neuro-expert on the sideline. They are involved in going through that protocol and offering an opinion with the team physician."

The NFL and the NFL Players Association are investigating the incident.

Tagovailoa's injury has brought back to light long-standing criticism of the NFL around player safety, specifically how the league handles concussions.

The NFL has paid out upwards of $860 million to hundreds of former players over its handling of concussion-related brain injuries.

Dr. Bailes says despite the uproar, the league is light-years away from what it was when he was on the sidelines in the 1990s.

"We would bring a player to the sideline, and we'd evaluate him and give about 15 or 20 minutes to see if he improved or snapped out of it or cleared up," Dr. Bailes said. "If they did, they would often — almost usually — go back to the same game. That's one of the biggest changes there should have been made, so now we don't do that. If we think a player has had a concussion, then it's a thumbs down. There's no discussion, no argument they're done for that day, whether it's a game or practice."

In a statement Monday, Tagovailoa said, "I am grateful for the support and care I've received from the Dolphins, my friends and family, and all the people who have reached out. I'm feeling much better and focused on recovering so I can get back out on the field with my teammates."