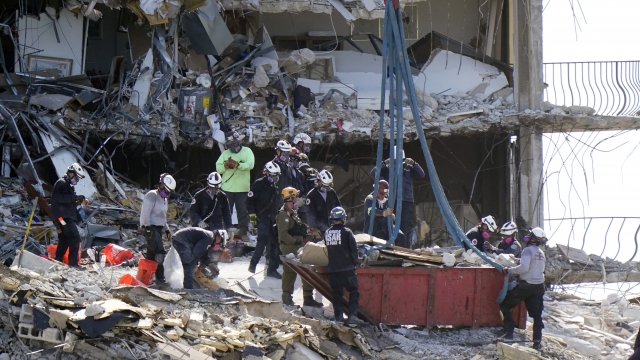 SMS
After Collapse, Engineers Warn of Florida Environmental Challenges
By Lauren Magarino
By Lauren Magarino
June 27, 2021
Study shows the now-collapsed Surfside building sunk half an inch over a 6-year period in the 90s.
SHOW TRANSCRIPT

Miami is all about movement.

Breaking ground to keep up with ballooning demand for a piece of paradise.

But the very structures built to house, and even entertain people, are facing a new level of scrutiny.

In wake of this 40-year-old residential building crumbling to ruins, less than 24-hours after a city-mandated building inspection.

"I am directing that our Department of Regulatory and Economic Resources will immediately commence an audit of all of the buildings at the 40 year point and beyond," said Miami-Dade County Mayor Daniella Levine Cava.

The mayor is quickly demanding accountability.

Newsy's Lauren Magarino: "Do you think a step like that is going to be helpful?"

Azizinamini has developed technologies to keep buildings and bridges in earthquake zones from collapsing.

"You’ve got to couple that with, what else can I do so I can address the problem systematically," said Azizinamini.

Current regulation requires buildings to undergo inspection for recertification at 40 years and then every ten years after that.

Like a doctor’s visit, where a doctor conducts a physical exam, and if it raises concern specific testing begins.

"You may do an MRI, take an X-ray things like that. Same thing with respect to buildings, too," said Azizinamini.

The technology to do this already exists.

"We have non-destructive testing," Azizinamini said.

Structural engineers can identify section losses and signs of corrosion without disrupting the building.

"What we can say is during that period the building moved," said Wdowinski.

His studies have found that the now-collapsed Surfside building sunk half an inch over a 6-year period in the 90s.

"The police were here and they wanted to get a first hand report of my study," he said.

Authorities are now closely looking at that information.

The state of Florida has also been funding Wdowinski’s latest subsidence study in the Miami area, this time also using GPS trackers.

Magarino: "Do you think change will come after this?"