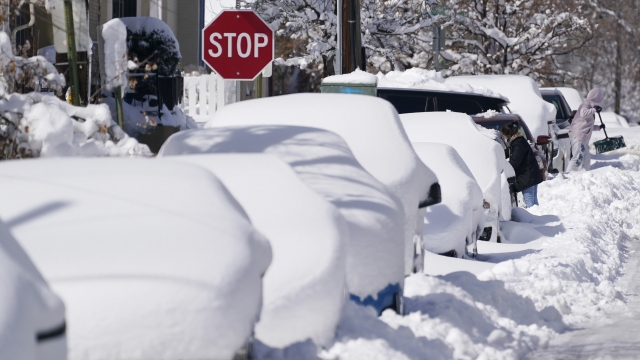 With falling snow and falling temperatures, winter has arrived — sort of.

In the United States we have two different definitions for winter — meteorological and astronomical winter.

Meteorological winter runs from Dec. 1 through the end of February. Meteorologists break the calendar up into four three-month seasons, and each season is based on the similarity of the weather.

Astronomical winter is based on equinoxes and solstices. They define the tilt of the planet and what part of the Earth is facing the sun. The winter solstice is Dec. 21. It's when the Northern Hemisphere is tilted the farthest away from the sun, creating the day with the least amount of sunlight.

NOAA's climate prediction center updated its winter outlook, and depending on where you live, you could be getting less or more winter. This is because La Niña pushes the jet stream northward into Canada.

It swoops down over the plains and heads back up toward the Northeast, creating areas of the country that are wetter and others drier. The higher jet stream allows atmospheric rivers to flow into The Pacific Northwest, bringing heavier rains.

For the next three months, the Northwest and the Great Lakes will be wetter with more snow, freezing rain and ice, while the Southeast and Southwest will be much drier than normal.

It's also going to be warmer in those same regions, which is not good news for the Western United States — still in the grips of a megadrought that could extend into next year if there's less snowpack and winter rain.

By the start of meteorological spring on March 1, we'll know if the winter weather will snap the drought.