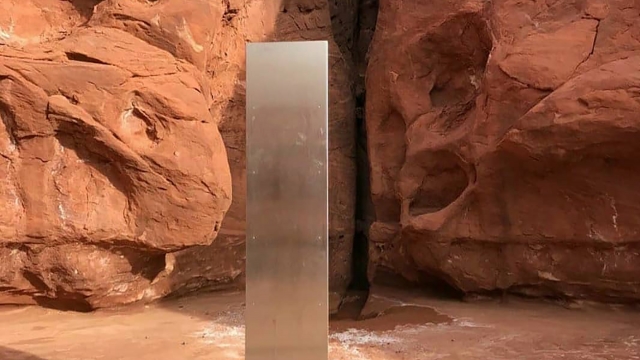 SMS
Metal Monolith Discovered In Utah Desert
By Meg Hilling
By Meg Hilling
November 25, 2020
It is unclear as to where the roughly 10 foot tall, three sided monolith came from or how long it's been in the desert.
SHOW TRANSCRIPT

Officials in Utah say they are facing a mystery unlike any they've seen before, following the discovery of a metal monolith in the state's red-rock desert.

"I've heard everything from, did this fall from the sky, you know, did it kind of implant itself there? Is it otherworldly," Lt. Nick Street, Utah Highway Patrol said.

The roughly 10-foot-tall, three-sided structure was discovered by the Utah Department of Public Safety Aero Bureau and the Division of Wildlife Resources during a helicopter survey on November 18.

"Without looking at it close and seeing that there are, in fact, human-made rivets that put this thing together, you could definitely let your imagination run wild," Street said.

Officials say they are working to determine how the sci-fi looking structure ended up in such a remote part of the desert — the nearest town, Moab, is 20 miles away. Many say it looks like the monolith from the sci-fi classic 2001: A Space Odyssey.

It's not clear how long it's been there in the Utah desert.

"For all we know, this has been there 40, 50 years, maybe more, It's the type of material that doesn't degrade with the elements and it may only be a few years old. Who knows? Like I said, it's tough to say at this time. There's no real way to know based on the material that it's made out of how long it's actually been there," Street said.

Officials aren't saying exactly where it's located. They don't want the public to try to venture to such a remote section of the desert. They are also asking that no one make any plans to place their own installation on public land regardless of "what planet you are from."

"Obviously, we don't want people going out there and digging into our Red Rock on public land and placing stainless steel objects, We take it very serious when things are defaced or, you know, painted out in our public lands and this would be taken as seriously," Street said.