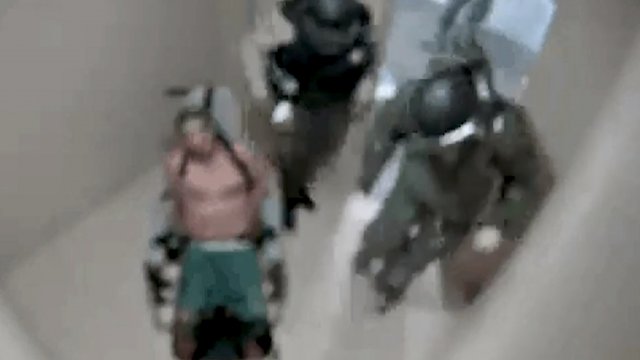 SMS
Mental Illness In County Jails Remains A Problem Across The U.S.
By Jamal Andress
By Jamal Andress
June 17, 2020
A ProPublica investigation finds disturbing use-of-force tactics and lack of care led to a mentally ill man's death while in custody.
SHOW TRANSCRIPT

As America evaluates police brutality and reform, one topic seemingly missing from the discussion is mental health.

According to the National Alliance on Mental Illness, almost 2 million people with mental illness are booked into jails each year.

“Jails and prisons are for bad people who are trying to hurt people, not because you're sick,” Cook County Sheriff Tom Dart said.

As the world protests police brutality on the street, ProPublica looked inside the system. On Tuesday, they released findings from an investigation into misconduct in the death of Philip Garcia, an inmate at California’s Riverside County Jail. Seventeen hours of video chronicle the last moments of Garcia’s life, which he spent tied down to a gurney suffering a psychotic break.

Thalia Beaty was the lead reporter on this investigation.

BEATY: "Is this stuff an outlier? A terrible, extreme example of something that never should have happened? Or is it symptomatic of the way that this department operates? And what we learned is that there are big issues in the sheriff's department and within the way that health care and mental health care is provided to inmates."

Garcia was originally arrested for allegedly assaulting his roommate and business partner after police responded to a call about him smashing a neighbor's window. He displayed erratic behavior that experts told ProPublica was more than likely due to some kind of mental health crisis.

But instead of being treated for a mental breakdown, Garcia spent the next 18 hours in self-isolation before ultimately being restrained.

During his 44 hours in police custody Garcia spent more than 20 hours with his arms and legs restrained. Riverside County Sheriff’s deputies are seen on video pressing a plastic shield onto Garcia's face using a stinger grenade and other significant uses of force.

BEATY: "One thing that really stood out to me is that the sheriff's department itself concluded that no wrongdoing occurred in this case. … And I think that the footage shows that if that's the case, then there is something very disturbing about what is normal and okay in these systems."

Records obtained by ProPublica show Garcia suffered from a potentially fatal condition called rhabdomyolysis, which is brought on by overexertion. But the deputies and nurses working with Garcia "appeared oblivious" to his condition. Garcia's death was ruled a homicide by the local county coroner.

While Garcia's story is particularly gruesome, Beaty says it reflects a larger problem in county jails across the country.

In Chicago, even the local Cook County sheriff, Tom Dart, is frustrated with health problems being dumped into his jail.

"If ever there is a statement of just how screwed up our society is, I'm running arguably the largest mental health hospital in the country. And I'm a history major. And that's not how it's supposed to work," Cook County Sheriff Tom Dart said.

Garcia's story is not unique and these tragedies that take place behind jailhouse walls deserve the same critical eye as any other form of police brutality.

BEATY: "The way that people view jails is that they're a place for bad people who are dangerous to society. And I think advocates for more humane jail and prison systems would tell you that they are a part of the community, inseparable from the community. … This story is just one of a litany in California alone of people dying in restraints, dying because of a lack of medical attention, dying after being tear gassed. It is just not unique, unfortunately."