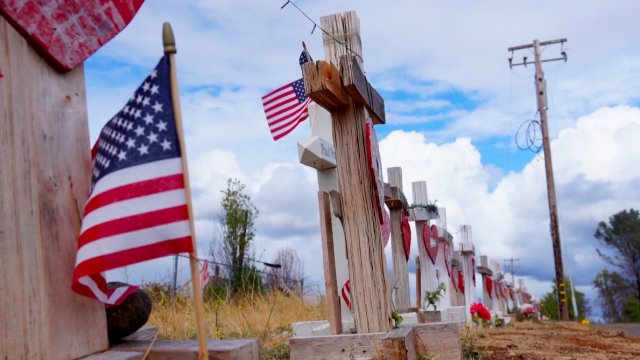 "One of the questions we have to ask is, did you lose a loved one in the fire? And she paused and then she said. 'Does suicide count?' And that was one of the hardest calls I've ever done in my life," Stacey Crook, a Camp Fire Survivor and Volunteer with Northern Valley Catholic Social Services told Newsy.

Mental health risks are becoming more of a reality for many in the Butte County communities where the Camp Fire burned last year. In the five months after the fire, there was a disaster recovery center here, to help residents regardless of insurance coverage. But now it's closed. And in an area that already had a psychiatrist shortage before the fire, recovering from a disaster like this has been particularly tough on residents.

"There's a lot of substance use that we've noticed has really ticked up for people and yes stress or adverse childhood experiences like things like the fire can really impact people's mental health and could make people who are normally having a pretty good time in life really struggle. And the more people struggling or stressed for the longer period time the more they are at risk for developing mental health issues," Scott Kennelly, Butte County Behavioral Health Interim Director said.

Kennelly says they’re also dealing with a stigma around seeking care. Before the fire, he says, some 600 people were receiving County Mental Health services in Paradise. In September 2019, they have 78 active cases. 78. Kennelly believes there are more people in need but that they are unwilling or unable to access services out of the area.

"The farther up in the hills people are the more they tend to not trust government or want to be left alone or don't necessarily want to help," he said.

Rebecca J. Schmidt studies how wildfires affect the physical and mental health of pregnant women and their babies. One year after the Camp Fire, she’s still collecting data from survivors, but she says there are some similarities among all mothers impacted by wildfire.

"We see that moms that were exposed to the fire in 2017 some still had their highest symptom a year later was stress and anxiety," she said.

The Camp Fire weighed on the same people who are trying to help, too. Scott Kennelly says 60 percent of his staff lost homes. He says what they learn here as they rebuild lives could help the next community that faces disaster.

"I think all county mental health systems need to look at is training their workforce in trauma informed care. And some of the techniques to deal with trauma related to disaster events., because it might not be like the Camp Fire. It might be a smaller version of a fire," he said.

"California is long overdue for a significant earthquake and unfortunately when that happens whatever county that strikes is going to have a similar level of destruction or disaster. But training your workforce in things like trauma informed Cognitive Behavioral Therapy, MDR which is Eye Movement Desensitization, re processing and some of the other special Trauma Response treatments that are available. We had some staff trained in those levels of treatment but we also had to send staff out during the last year to increase our workforce capacity."