With A Shaky Return Date, Members Of Congress Push For Remote Voting 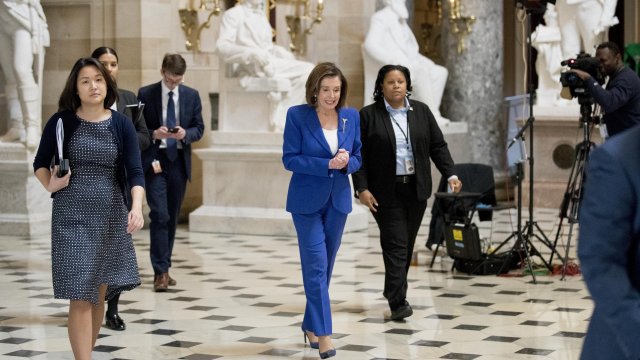 Congress just got their stay at home order: Leadership in both the House and Senate say members will stay at home until at least May 4. But with a nation in crisis and money from the first three coronavirus relief packages being spent quickly, there's likely more work to be done.

Gottheimer says members could conduct debates through video or phone conferences. Voting could either be done similarly, or members could have voting machines installed in their homes or district offices. He says this all could be set up in a matter of a few days.

But House leadership, his own party, says not so fast. Speaker Nancy Pelosi said remote voting is "way down the road" and told members of the media last week, "We aren't there yet." Senate Majority Leader Mitch McConnell has also been reluctant to support any rules changes. Congressman Jim McGovern, the Democratic chairman of the House Rules Committee, said in his 21-page report the "decision should be a multi-committee effort with substantial study and development."

Translation: It could take years. And in the past, it has. Rules changes after 9/11 weren't made until nearly four years later. No changes were immediately made during the 1918 Spanish flu.

Sarah Binder, a political science professor at George Washington University, says it would take detailed discussions and some serious politicking.

For now, the majority of members are hoping to pass legislation by unanimous consent, meaning everyone agrees to support the bill without recording a vote. But as we saw just a few weeks ago when congressman Thomas Massie of Kentucky tried to derail a stimulus bill, it only takes one member to force everyone to return to Washington to vote. That's exactly what Gottheimer is trying to prevent down the line.