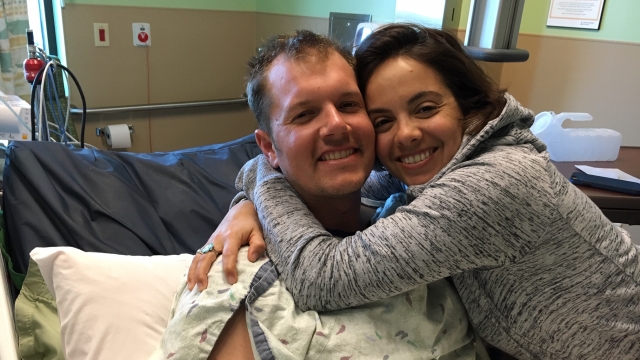 Doctors say young patients often feel invincible from heart disease. Steven Rice says he was one of those people. Then he had a heart attack at 32.

30’s, exercising, eating healthy — it's not what you think of when you think "heart attack." Throughout American Heart Month, Newsy is introducing young patients who are sharing their story to bring awareness to heart health. Doctors say young patients sometimes feel invincible when it comes to heart disease.

Steven Rice says he was one of those people. describes his early 30’s as healthy. Sure, he says, he’d have a cheat day here or there, but he also exercised regularly-four or five days a week, in fact. He thought he was the epitome of health — and then one weekend, when he was skiing in the mountains with his wife, he suffered a heart attack.

"I started feeling this kind of strange pain and felt that I was out of it a little bit and decided to call it a day after that run. It was just like, all of a sudden, like a vice like grip on my chest with the most intense what I thought was reflux or heartburn at the time. But [I thought] I'll get through it. In a couple hours it will dissipate won't be a problem. So I walked to get some water and that I was just overheated because I started to get kind of cold sweats and feel really clammy."

Chest pressure. Shortness of breath. Cold sweats. Individually, these symptoms could be signs of heat stroke or a panic attack.  But collectively, they can be signs of a heart attack, especially in younger patients.

"I've been monitored my entire life. I go in for my annual physicals. I have never had anyone tell me I have cardiovascular disease or any sort of heart deformity or anything like that. So that was the furthest thing from my mind was that I had something going on with my heart," he says.

"This process of atherosclerosis, which is blocking the heart arteries, starts showing up before we're 10 years old. So again we have to be proactive ahead of time. We can't wait till something happens to us to adopt healthy lifestyle," explains Dr. Sameer Mehta, a Cardiologist at Rose Medical Center. "You know also we can all look up stories of things happening to young people. So as much as we feel invincible at that age we're not."

Meet the 20-Year-Old Woman On Her Second Pacemaker

More and more children born with a congenital heart defect are growing into adulthood. What's the medical community doing to care for & monitor them?

Rice had an aunt who died of a heart attack, and a family history of heart disease and high blood pressure — all things that increased his own risk of a heart attack. At the emergency room near the ski resort, he found out he’d need to be airlifted to a hospital in Denver. Upon landing, Rice flatlined on the roof of the hospital and doctors used defibrillation to restore his heartbeat. But he wasn’t out of the woods. Doctors had located a blockage in his right coronary artery, and they needed to address it immediately.

"One of them, I'm not sure who, said 'Steve, you know what's happening right now?' And I had no idea what was happening. They said 'okay, well really quickly. We think we know where the blockage is and we're going to try to access it through your wrist,’" Rice recalled. "I said 'OK fine let's let's do this. Go ahead knock me out and. Do what you need to do.' And they said 'well we don't we don't have time to knock you out right now. We just need to start. So we're going to numb your arm and you just need to be still and remain quiet and try to be as calm as possible."

"I'm thinking you know, this is it," Rice said. "Like I'm toast. Any moment now. Like the lights are going out again. And that's it. And I didn't really say a proper goodbye to my wife. My parents have no idea what's going on right now. There's so many family members going through my head. Friends and family that I didn't get to say final goodbyes to."

The procedure was successful — doctors used a thin, expandable balloon to push the plaque against the artery wall. Now, Rice considers himself one of the lucky ones. Three years later, he has a son and he and his wife are expecting their second child. He says it’s motivation for being even healthier now. He doesn’t eat red meat. He works out every day. And says above all, he listens to his body.

"So my cardiologist and my primary care physician said, 'Listen like, you think you've got like a healthy weight and BMI and your cholesterol is OK. But your body disagrees with that. So we need to ratchet down even more." Which is what I've done over the last three years and will continue to do for the next sixty five years," Rice said.