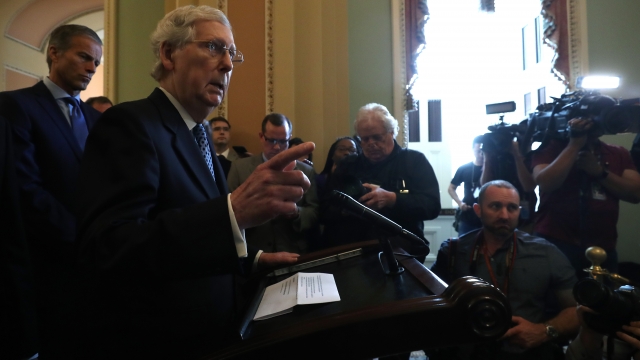 Senate Majority Leader Mitch McConnell has agreed to push forward on a bill that would provide as much additional funding as necessary for the September 11th Victim Compensation Fund until 2090.

The $7 billion fund is starting to run out, and benefit payments have been cut by up to 70%. The fund disperses money to people suffering from illnesses linked to toxic exposure during their work at September 11 terrorist attack sites. It also can be approved for families of people who died from illnesses linked to the exposure. It's is set to expire in 2020, and Congress has taken flak for being slow to renew it.

9/11 first responder John Feal told reporters Tuesday: "I've been to 181 funerals. I'm about to go to 182. So yeah, it's frustrating when you see a dysfunctional body at work who promises to fix yesterday's problems today, maybe tomorrow, and they don't work at our speed."

First responders met with McConnell about the bill on Tuesday.

Feal said: "Mitch McConnell made a commitment to the 9/11 community and my team leaders that he's going to help us get a piece of legislation that's going to be passed in the House in July for an August vote in the Senate. And that's way ahead of schedule."