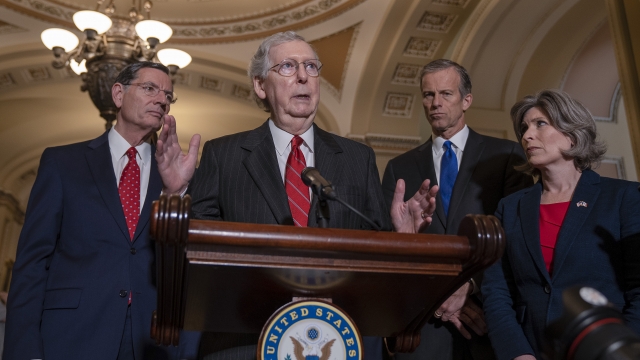 Senate Majority Leader Mitch McConnell says a measure on gun background checks will be “front and center” in an upcoming debate on gun-related legislation. On Thursday, he told Kentucky radio station WHAS “there is a lot of support for that."

The House passed that measure back in February, but it was stalled in the Senate.

McConnell has strongly opposed background checks in the past and while he didn't say he would fully support a bill requiring them, he did tell the radio host it would be considered among other gun-related legislation to "see what we can come together on and pass."

In addition to a bill on background checks for all gun purchasers, McConnell said the Senate would consider legislation on so-called "red flag" gun laws. That law would allow special protective orders for firearms to be taken away from people who are deemed dangerous by courts. It is also expected to discuss an assault weapons ban, although it's unlikely to pass with the Republican majority.

McConnell said “I think the urgency of this is not lost on any of us, because we’ve seen too many of these horrendous acts." He added, "what we can't do is fail to pass something."

The leader of the NRA, Wayne LaPierre, said in a statement after McConnell spoke, the association "opposes any legislation that unfairly infringes upon the rights of law-abiding citizens." LaPierre continued, saying "many proposals are nothing more than 'soundbite solutions' – which fail to address the root of the problem, confront criminal behavior, or make our communities safer."

On Thursday, House Speaker Nancy Pelosi called on McConnell again to bring the Senate out of recess for the discussion on gun-related legislation. McConnell said he would rather have Senate members come up with legislation to vote on in September so they can go forward and make a law. He said: "If we do it prematurely it will just be another frustrating experience. ... I think this is the best way to get a result."