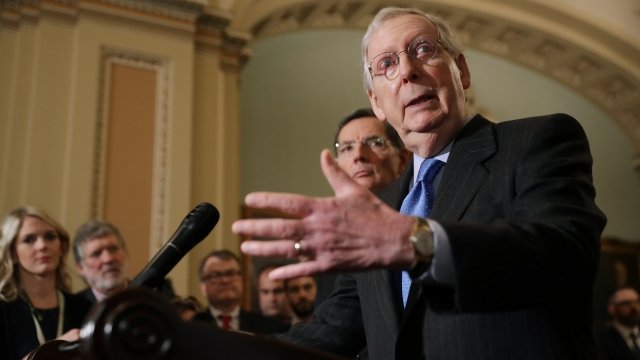 By Jamal Andress
December 12, 2018
Arkansas Senator Tom Cotton has been unrelenting in his criticism of the First Step Act
SHOW TRANSCRIPT

After weeks of uncertainty, Senate Majority Leader Mitch McConnell has opted to bring the sentencing and prison reform bill known as the First Step Act to a vote.

This comes after receiving pressure from numerous lawmakers and advocacy organizations on both sides of the aisle. And, perhaps most importantly, from the President — who tweeted "Go for it Mitch" while urging McConnell to give this bill a chance on the Senate floor.

While McConnell has said in the past he didn't want to bring this to a vote because of a lack of time in the legislative session, some observers believe he didn't want a Republican fight in the Senate over the details of this bill.

A fight that he may still have to have — specifically with Arkansas Senator Tom Cotton who has been unrelenting in his criticism of the First Step Act.

"I gotta say, there are people who have come to this process with real concern about getting this right — people who want to see a substantive bill that actually increases public safety and lets people earn a pathway home and get rehabilitated on their way. Tom Cotton is not one of those people," Jessica Sloan said.

Jessica Sloan is the national director and co-founder of #Cut50, a prison reform initiative that has been lobbying to get the First Step Act to President Trump's desk.

"Tom Cotton despises everything about criminal justice reform. When I look at the concerns that Tom Cotton has raised, I see that he has gone in and found a way to spin things and make misinformation that sounds really scary to the media. However, he's wrong, it is just misinformation," Sloan said.

Cotton has raised several concerns surrounding the bill, but the big one is he believes it offers "early release" to "violent felons and sex offenders."

In response to his criticism, lawmakers have added several additional offenses to the bill's exclusion list — the list of prisoners who are excluded from receiving time off of their in-prison sentence. While Sloan still supports this version of the bill, she doesn't believe there should be an exclusion list at all.

"I don't think anybody should be excluded from earning these time credits. ... I think that if we had somebody who had been in there for 10 years, even if they had committed a violent crime, I would rather that person come home in nine and a half years, having gone through almost a decade of rehabilitation programming ... than come home and live next to me after 10 years, not having taken any of that programming," Sloan said.

The Senate reportedly doesn't have the unanimous consent it needs to fast track a vote on the criminal justice reform bill this week, but GOP leadership still claims the bill will get a vote before this legislative session ends.