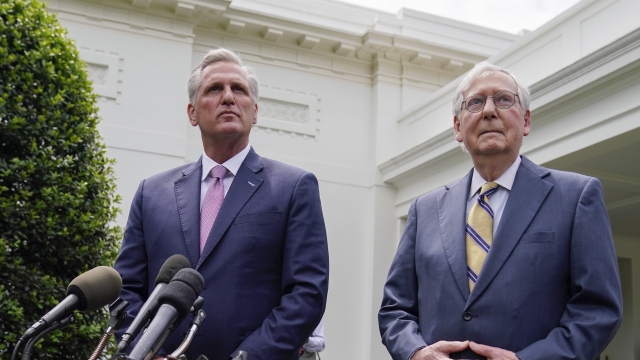 For the first time since his inauguration, President Joe Biden hosted a meeting with congressional leaders of both parties at the White House.

“What the bottom line here is we’re going to see whether we can reach some consensus on a compromise, and then [moving] forward we’re going to talk a lot about infrastructure today," President Biden said.

The meeting comes as the president works to pass his massive and costly infrastructure proposal. But both Republican leaders have claimed they haven't seen much outreach up to this point. The president and the top-ranking Republican in the House have gone months without speaking. McCarthy complained that previous requests for meetings went ignored.

"This is an opportunity to sit down with leaders from both parties, have a discussion, again, about common ground [and] how we can work together moving forward," said White House press secretary Jen Psaki. "He did talk to him around the joint address."

Political observers point out that President Biden's relationship with congressional Republicans is important not just for getting his agenda passed now, but for after the midterm elections that could shift the balance of power.

"Both McConnell and McCarthy could be in the position of majority leader or, in McCarthy's case, speaker, come 2023," said Lanhee Chen, a David and Diane Steffy fellow at the Hoover Institution. "So it is important for Biden to cultivate relationships for the future. But the McConnell relationship is more immediately important for Biden. Any legislation that he hopes to get through, it's going to be critical for McConnell to be involved."

"One hundred percent of my focus is on stopping this new administration," said Senate Minority Leader Mitch McConnell.

But the longtime Senate Republican has indicated he has some willingness to compromise, and those hoping for bipartisan solutions out of Washington say regular meetings could go a long way toward finding common ground.

"We know what the realities are," said John Richter, director of the Congress Project at the Bipartisan Policy Center. "And yet, for the sake of the country, we need to find a way to try to transcend some of that. And part of that is carving out time to have communication."

Upon the conclusion of the meeting, both Republicans described the talks as a step forward but drew a red line in the sand on how far they're willing to go.

"Not going to negotiate here, but you won't find any Republican who's going to go raise taxes," McCarthy said.