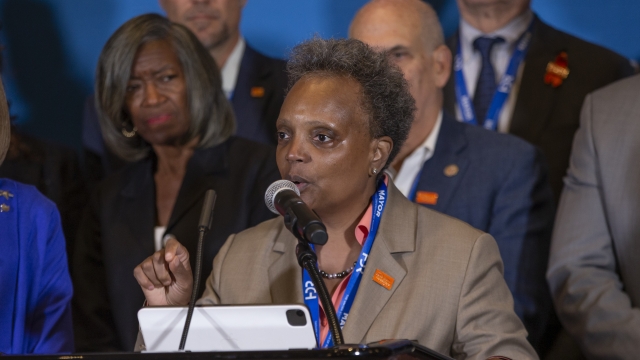 SMS
Mayors In Major Cities Call For Gun Legislation
By James Packard
By James Packard
June 3, 2022
Mayors of all political stripes are trying to do what they can to make living in U.S. cities easier — starting with making it safer.

A bipartisan group of more than 250 mayors are pleading with Congress to pass gun reform.

On the heels of a series of deadly shootings, Republican and Democratic leaders from cities all over the map want change.

"There are a flood of guns in the wrong hands. We have a lot of people that have guns that should not have guns," Suffolk Police Chief Al Chandler said.

In a reissued letter originally published in 2019, they're asking the Senate to pass a series of laws already approved in the House to expand and strengthen background checks for gun purchases and close loopholes in those checks.

Among the mayors asking for the changes, Chicago Mayor Lori Lightfoot is trying to convince Chicagoans the city is safe amid a rash of gun violence.

"What do you say to the people who say they don't feel safe enough to return to work or play downtown and wonder why the city doesn't do more? A. First of all, we hear them and we're working our tails off every single day," she said.

The plea is taking on added urgency after one of the most horrific school shootings in memory.

And while 2nd Amendment crusaders would have schools hardened with fewer open doors and armed guards, experts think that's the wrong approach.

"And our research shows that students who attend schools that rely on law enforcement and other means of surveillance have lower test scores, performances and rates of college attendance," Johns Hopkins Center for Safe and Healthy Schools Executive Director Odis Johnson said.

Many of these mayors are watching violence increase in their cities.

But living in American cities is getting harder for other reasons, too. The cost of living is soaring. Home prices in Salt Lake City, Denver, Austin and San Diego are all up more than 20% in the last year.

"I think people who have been waiting for values to go down are quite disappointed, which is what I've been saying for the last couple of years," San Diego Loan Officer Mark Goldman said. "Is it possible values go down? Yes, it is. Is it likely? Not in my opinion.”

Now, mayors of all political stripes are trying to do what they can to make living in U.S. cities easier  — starting with making it safer.