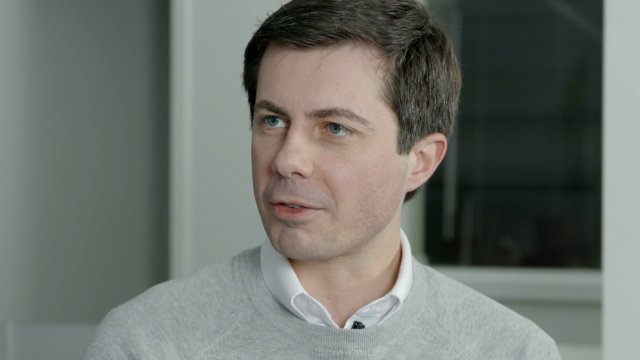 South Bend, Indiana Mayor Pete Buttigieg says he has a lot to offer Democratic voters, despite the crowded 2020 field.

"I think it's pretty safe to say that I’m not like the others. I admire a lot of the people who are in this conversation but the truth is everybody brings certain overlapping qualities," Buttigieg told Newsy.

The 37-year-old's candidacy has the potential to be filled with firsts. He would be the first Millennial president and first openly gay commander-in-chief.

But he knows he'll have a lot of work ahead introducing himself to voters who largely don't know who he is.

"I think the more choices there are, not only is that more favorable to newcomers and underdogs, and let's face it, I'm both of those things, but also i think the better it is for the party not just for 2020 but really for the next era," he said.

His message is largely focused on the issues most pressing for his generation, like climate change and the economic hurdles facing young Americans. But he feels those issues will resonate with voters from all age groups.

"One of the strongest patterns I've found is older voters are even more excited about the generational message than younger voters, and I think it's because they've lived this from both ends," Buttigieg said. "They've had the experience of being young people frustrated by the decisions people, in turn, older than them but also because they are now parents and grandparents and they care deeply about the decisions of the world that they are now eventually going to leave to the rest of us."

Buttigieg made history at 29-years-old, becoming the youngest mayor of a major American city. He served in Afghanistan and ran for head of the Democratic National Committee. Those experiences, he says, have prepared him as well as anything can to run for the nation's highest office.

"I think there's an urgent need for a generation, a new generation, to put forward leaders at the highest level...We're the ones paying the bills for these tax decisions being made, we're the ones dealing with climate changes, we're the ones who are going to be ultimately responsible for fixing a number of problems being created by those in charge today," Buttigieg said.

Though the Iowa caucuses are nearly a year away, Buttigieg will need to make a splash much sooner if he formally enters the race.

Early 2020 polling shows Buttigieg near the bottom of the pack.

"If we can’t make those criteria then we shouldn't be here," he said. "It may not be easy, but when you’re talking about the American presidency, you had better be able to organize on a deep and broad level."

Despite his young looks and soft-spoken demeanor, "Mayor Pete" — as he is known — says he is ready for the rough-and-tumble world of national politics, and the brash rhetoric often used by the current president.

"I grew up in Indiana and I’m gay, so I’m pretty comfortable dealing with bullies," he said. "And I've also been deployed in wartime, so I know what it's like to literally take incoming fire. So I think I can handle President Trump."