May And Macron Are Going After Websites That Harbor Terrorist Content 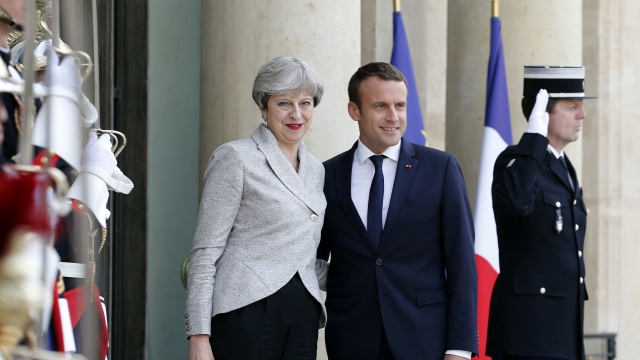 SMS
May And Macron Are Going After Websites That Harbor Terrorist Content
By Lindsey Pulse
By Lindsey Pulse
June 14, 2017
U.K.'s Theresa May and France's Emmanuel Macron discussed Brexit and imposing a legal liability on websites that they say shelter harmful content.
SHOW TRANSCRIPT

French President Emmanuel Macron claims it's not too late for the U.K. to stay in the European Union.

U.K. Prime Minister Theresa May and Macron met up in Paris on Tuesday; Macron reportedly told May there's still time to reverse the Brexit decision.

Formal negotiations for leaving the EU haven't started. Macron said until those talks officially end, the U.K. can decide to stick around. Still, May confirmed Brexit discussions will begin sometime next week.

But Brexit wasn't the focus of the meeting; both world leaders' main concern is counterterrorism — specifically online.

Both the U.K. and France have experienced deadly terror attacks in recent months. Twenty-three people died in an explosion at an Ariana Grande concert in Manchester, England, in May.

Less than two weeks later, a van plowed through a crowd at London Bridge and Borough Market, killing eight people.

In France, a gunman opened fire on the Champs-Élysées just days before the country's first presidential election in April. One police officer was killed. Larger scale attacks killed dozens in Nice last year and in Paris the year before that.

Now, Macron and May have their eyes set on social media sites that they say create a "safe space" for extremist content. They want to impose some sort of legal liability for sites that don't remove material that's deemed harmful.

French and U.K. officials will reportedly hold more meetings to discuss ideas for punishing social media sites that fail to follow through in the coming days.