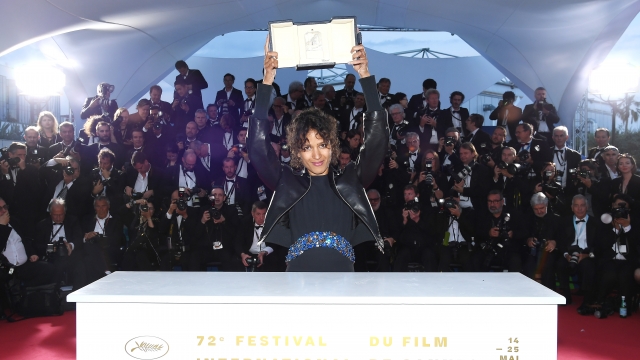 Director Mati Diop just made history, becoming the first black woman director to win an award — or even have a film accepted for competition — at the Cannes Film Festival. Diop's debut feature film "Atlantics" took home the Grand Prix.

On her historic win, Diop said, "It's pretty late and it's incredible that it is still relevant."

The Cannes Film Festival has recently been criticized for its gender disparity. Only 82 women have been screened in the competition, compared to over 1,600 men.

Diop was one of four women filmmakers, and one of 19 filmmakers total, selected to compete for the Palme d'Or this year.

Four women also competed for the highest prize in 2011. But only one woman director has ever won it: Jane Campion took home the title for "The Piano" back in 1993.

Diop is now one of just three black directors and four women directors ever to win the Grand Prix.

Last year, actress Cate Blanchett led 82 women, one for each woman who's ever screened at the festival, in a protest for more gender equality on the festival's red carpet. Just days later, Cannes' directors joined several other festival leaders and signed a pledge to close the gender gaps in their competitions.

In light of that pledge, Diop is hoping to see more progress.

"My first feeling to be the first black female director was a little sadness that this only happened today in 2019. ... I knew it, as I obviously don't know any black women who came here before. I knew it, but it's always a reminder that so much work needs to be done still."