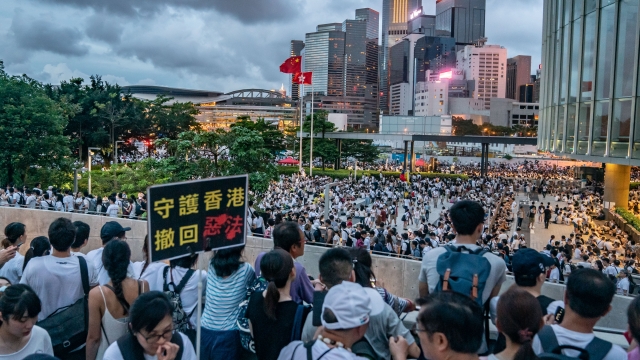 SMS
Massive Protest In Hong Kong Over Extradition Legislation
By LeeAnne Lowry
By LeeAnne Lowry
June 9, 2019
The protesters are speaking out against a bill that would allow China to extradite suspects from Hong Kong.
SHOW TRANSCRIPT

Protesters took to the streets of Hong Kong on Sunday to oppose proposed extradition legislation.

The government-backed bill would allow China to extradite suspects from Hong Kong. The bill doesn't guarantee a fair trial.

Hong Kong operates under different systems than the mainland. In 1997, the city transferred from British to Chinese rule. It was guaranteed its own social, legal and political framework for 50 years.

Critics say the legislation could be used to target political enemies and would undermine the city's semi-autonomous legal system.

Police estimate around 240,000 people turned out for the event, but protest organizers say it was over 1.3 million. That would mean one in every six people showed up.

The law is expected to be voted through in the next few months.