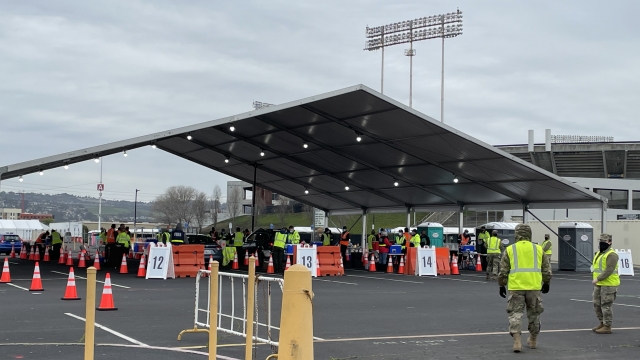 SMS
Mass Vaccination Sites Have Already Seen Big Wins And Big Setbacks
By Lindsey Theis
By Lindsey Theis
February 17, 2021
Across the country, getting vaccines to people is a patchwork of federal, state and local efforts.
SHOW TRANSCRIPT

The goal: get as many eligible people as possible equal access to a vaccine.  But supply is still low, and officials are pleading for patience.

Tina Curry, chief deputy director of the California Office of Emergency Services: "We do ask the public, again, if you don't see anything in the coming days to keep trying."

The good: Two new vaccine sites open in California aiming to distribute shots for up to 6,000 people a day, seven days a week for eight weeks, all funded by the federal government.

These are the test runs for the Biden administration's efforts to create 100 mass vaccination sites nationwide in 100 days.

The entire time we've been here today, it has really been a steady flow of cars. You can see behind me they go through these lines, and then there are three different tents. Each tent has about five bays where some 100 vaccinators total are just standing by and waiting and getting those shots into arms.

The site is open to people in the Bay Area that include health care workers, people age 65 and older, and essential workers in food and agriculture, emergency services, education and child care.

Rebecca Kaplan, chair of Oakland-Alameda County Coliseum Vaccination Task Force: "We have a lot of front-line workers, people who work in jobs where they have to physically go to work, whether they are bus drivers or cooks or nurses. And a lot of these people are worried they need access to vaccines."

The doses here are coming from a federal supply, extra to what the county was already getting.

Officials are picking locations for sites that are easy to get to. Here, the public transit system is offering free train rides. Shuttles will transport people from their homes. By the end of week, mobile vaccine units from FEMA will go into community sites, too.

The help is desperately needed.

The bad: In the past week, sites like a city-run mass vaccination hub in downtown San Francisco shut down because of low supply. They are planning to reopen only for second doses this Friday.

Winter storms are slowing vaccine shipments elsewhere in the country. Storms affecting vaccine distribution hubs in Kentucky and Tennessee have delayed vaccines to at least 13 states.

In Colorado, more than 133,000 doses were expected to arrive through Thursday. About 2,000 people in Miami-Dade County, Florida, won’t get second doses as scheduled.

And feeling the impact most: people hit the hardest by COVID, already getting vaccinated in far fewer numbers.

Dr. John Swartzberg, University of California-Berkeley School of Public Health: "Until we can get a dependable, reliable supply of vaccine coming to not just the states, but to the different regions within the states so that we can do proper planning, we're just going to still stumble like this."

The Biden administration announced Wednesday it's on track to have enough supply for 300 million Americans by the end of July.  It's averaging 1.7 million shots per day, up from 1.1 million four weeks ago.