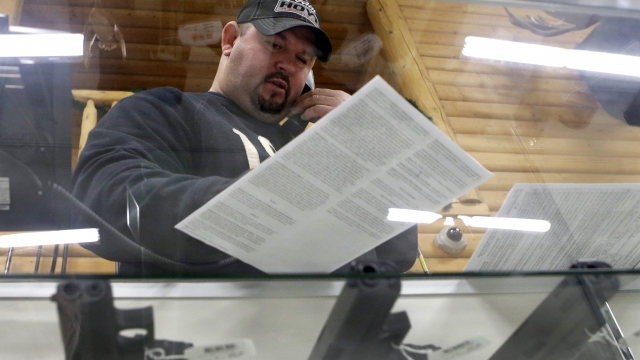 Gun background check loopholes are again up for debate on Capitol Hill.

"But our existing gun laws are irrationally limited, loophole ridden, and inadequate," said Robyn Thomas, the executive director of the Giffords Law Center.

"These gaps make it too easy for felons, and mentally unstable people to get their hands on guns and harm others," said Sen. Dick Durbin.

So what are these loopholes that currently exist in the country's background check system?

Gun show and internet loopholes are two of the most frequently mentioned. Federally licensed firearms dealers are required to run buyers through a background check for every sale, regardless of where that sale is completed. Private and unlicensed sellers don't face that same requirement. So they can sell firearms at gun shows or online without doing a background check, and even gun rights advocates recognize the rise of internet gun sales could be problematic.

"Even though we know this is not how most criminals are getting their guns, it is a fairly easy avenue that they could potentially go through. So even though it would be a what I call a low-reward endeavor, in theory, again, it makes sense to address that," said Amy Swearer, a legal fellow at the Meese Center for Legal and Judicial Studies at the Heritage Foundation.

The Charleston loophole is linked to how long it takes to complete a background check. Federal law gives the National Instant Criminal Background Check system three days to process an application for a new firearm. If the check is still pending three business days later, the sale can proceed. The Charleston loophole is named for the Emmanuel A.M.E. Church shooting in Charleston, South Carolina, where the shooter bought his gun after the three-day waiting period expired.

"It's good in the long run for everyone if the background check system is one speedy and two, you know, the ATF, the FBI have the the manpower and the resources to get them done in a timely manner, and to keep the system updated," said Swearer.

In general, a felony conviction of any kind or a misdemeanor domestic violence conviction prohibits someone from buying a gun. Lawmakers want to to add more misdemeanors to that list.

Sen. Amy Klobuchar has been calling for Congress to close the boyfriend loophole, which allows some people convicted of misdemeanor domestic abuse to still purchase a gun.

And during his 2020 campaign, President Joe Biden said he wants to prohibit people convicted of misdemeanor hate crimes from buying or possessing a firearm.

Another concern is the ghost gun loophole. People can purchase kits or partially manufactured firearms that can be turned into untraceable guns without a serial number. That's something President Biden has said he might address using an executive order.

"These new weapons that are being made by 3D equipment that aren’t registered as guns at all, there may be some latitude there as well," said President Biden.

The House has passed a bill requiring background checks on all firearms sales and transfers, with a few exceptions. Senate Majority Leader Chuck Schumer has promised to bring the bill up for a vote, but it would likely need to be amended to have any chance of passing the Senate.