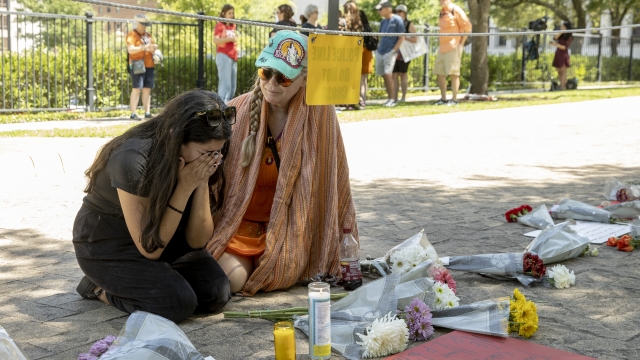 It's happened in Newtown, Connecticut; in Parkland, Florida; and now in Uvalde, Texas — 19 children and two teachers killed by an 18-year-old with a rifle.

This is not normal — and let’s look at what we mean by that.

The U.S. is a clear outlier when looking at the number of school shootings each year. That’s true overall, and that’s true per capita.

The same is true for mass shootings overall, when looking at shootings of four or more people in one instance. The U.S. has a problem unlike any other nation.

The reason behind that depends on whom you ask, but a lot of analysis and beliefs on that question come down to two factors: mental health and guns.

What’s notable there is that the mental health crisis in the U.S., by international standards at least, is actually very much in line with many other countries.

So, that leaves guns. And when it comes to guns, once again, the U.S. is very much not a normal country.

The U.S. has more guns per person than any other nation — and it's not especially close. The nation has more than twice as many guns per capita as the next country, which is Yemen.

Look at it this way: With 393 million firearms owned by civilians in the U.S., there are enough guns to arm every man, woman and child in America, and then throw in a second gun for another 63 million people.

In many parts of the U.S., those guns are easily accessible, even for 18-year-olds, with few or no questions asked.

In study after study, researchers have pointed to this proliferation of guns as the key factor behind the high rates of gun violence and mass shootings in America.

There are a lot of factors in America’s gun violence epidemic. Some of them are complicated, but on this factor — the ease of access to firearms — the data is perfectly clear: This is not normal.