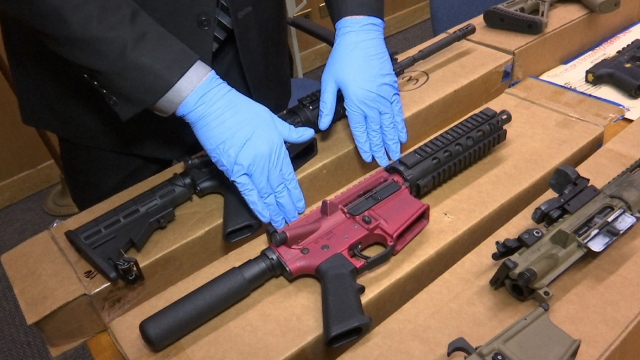 Survivors and families of victims of the July 4 shooting in Highland Park, Illinois, are the latest to take gun-makers to court.

The July 4 shooting outside Chicago in Highland Park, Illinois, is one of more than 500 mass shootings in 2022 so far.

"Within the first few seconds, while most people were unaware of what was happening, I was hit for the first time. I felt a tight shock in my back and hip and saw my entire lower left side was bleeding," said Lauren Bennett, a Highland Park shooting victim.

Shootings have increasingly led to legal action for not just the shooters, but against gun manufacturers as well.

Antonio Romanucci is one of several attorneys representing Highland Park shooting victims and their families in lawsuits against Smith and Wesson.

"They designed and marketed an M&P assault rifle to do exactly what the shooter did on July 4  — and that has changed people's lives forever," said Romanucci.

These kinds of lawsuits have sprung up across the country.

In Uvalde, Texas, parents of students who survived the shooting filed a federal lawsuit against manufacturer Daniel Defense for its marketing tactics — claiming its aggressive ads recklessly endanger kids. New York passed a law allowing the state, city governments and New Yorkers to sue gun manufacturers for endangering public safety. And most notably, there was a $73 million settlement between Remington Arms and the families of several Sandy Hook victims. The suit argued Remington violated a Connecticut consumer law prohibiting encouragement of illegal behavior.

"Today marks an inflection point when our duty of care to our children as a society finally supersedes the bottom-line of a industry that made such an atrocity as Sandy Hook possible to begin with," said Veronique De La Rosa, the mother of Noah Pozner, age 6 when he was killed.

The idea behind these lawsuits echoes the Sandy Hook case, the marketing of the weapon violates state consumer protection laws.

A Month After Highland Park Shooting, Community Helps Each Other Mourn

Survivors of the Highland Park shooting are starting the grieving process for their losses, as many turn to faith as a way to get through it.

"I've never seen an advertisement where that gun is pointed at a deer or pointed at an animal. It all has to do with being a man. That's how these guns are marketed. And these young, impressionable, vulnerable adults want to be men. And then they create this story about themselves with a Smith and Wesson," said Romanucci.

Back in August, Smith and Wesson's CEO put out a statement saying the gun industry is under "unprecedented and unjustified attack," and blaming politicians, the media and a "culture of lawlessness" for ongoing gun violence. The industry argued that other manufacturers are typically not held liable for the misuse of their products, citing how car companies are not sued over drunk driving accidents.

For years, gun manufacturers have been shielded from legal action by the "Protection of Lawful Commerce in Arms Act" or PLCAA.

The 2005 law was written to protect gun makers from lawsuits when the weapons they manufactured are used in crimes.

Jake Charles is a Pepperdine Law professor specializing in firearms and violence.

"PLCAA is a very broad protection, right. It's kind of one of the rare industry specific laws that Congress passes to immunize it from lawsuits," said Charles.

"It does set a precedent kind of in both ways of thinking about that. So, one is in terms of legal precedent, it also stands as precedent in the more colloquial way that we think of, as in, this is a precedent for future action. It's a large settlement — $73 million," said Charles.

For Liz Turnipseed, who was injured during the Highland Park shooting and is also suing Smith and Wesson, this lawsuit felt like a responsibility.

"It plays over and over. I felt like I had to. I had a unique opportunity to help put a real face on what these guns do to people, and what it feels like, and give it a first-person perspective," said Turnipseed.