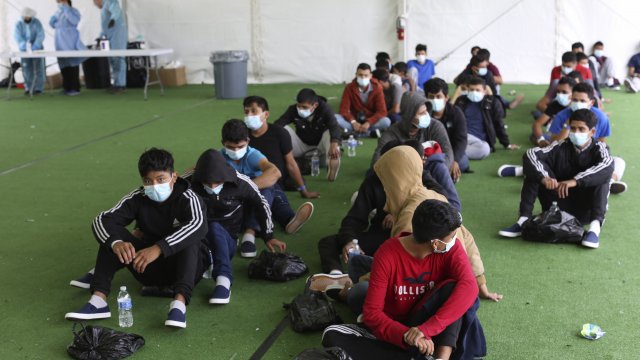 SMS
Critics Say Mass Emergency Shelters For Migrant Kids 'Inadequate'
By Ben Schamisso
By Ben Schamisso
May 13, 2021
Unlicensed shelters in vacant sites across the U.S. are housing thousands of unaccompanied migrant kids for weeks at a time.
SHOW TRANSCRIPT

Border jails housing unaccompanied migrant kids like this site in Donna, Texas, are no longer packed.

"Today at this facility, rather than approximately 3,700 unaccompanied children, there are 334," Homeland Security Secretary Alejandro Mayorkas said last week.

The Biden administration is now transferring children out of border patrol custody at a much faster pace than earlier this year — even releasing before and after photos of detention to tout what it calls "tremendous progress."

But the crowding hasn't been solved. It's merely moved to other facilities run by Health and Human Services like vacant convention centers and military bases — sites that have been mostly closed to the media.

"The U.S. government still continues to spend funds, spend taxpayer money to hold these children in facilities that are inadequate," said Luz Lopez, a senior supervising attorney at the Southern Poverty Law Center.

The number of unaccompanied children in HHS care nearly quadrupled since the end of January to over 20,000 today — leading the Biden administration to quickly open up a dozen unlicensed emergency shelters across the U.S.

Children's advocates say these mass shelters, while a step up from border jails, are still extremely troubling.

"When a facility is not licensed, it has a different level of oversight and accountability. Who is doing the supervising to ensure that a child never experiences harm while they're in government custody?" asked Jennifer Podkul, vice president for policy and advocacy at Kids in Need of Defense.

The Associated Press says a handful of contract staffers at these sites have been dismissed this year after reports of abuse.

"They're not provided proper care, and in some cases they will languish for months without any reason," says Lopez.

Over 80% of the children who cross the border without a legal guardian have a parent or relative in the U.S.

But before releasing minors to their designated sponsors, HHS has to fully vet the adults — a lengthy process that the Biden administration has reduced to around a month.

Still, advocates say it could be done much faster to prevent prolonged detention.

"The government should just try to figure out a way to expedite reunification and then focus on conducting follow up, more detailed background checks on the sponsor, the family member, the sponsor of the child," Lopes said.