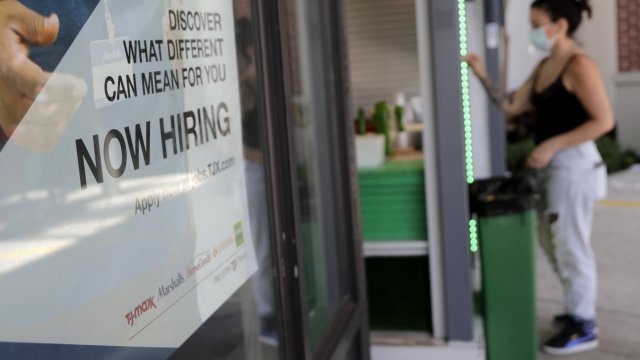 Democratic Rep. Grace Meng's targeted relief plan looks to offset the fall of women from the labor force during COVID-19.

From nanny to teacher to nurse and more, women have taken on lots of additional roles during the pandemic. And it’s having a devastating effect on their careers.

"Quite impossible to manage. So I had to put it on hold," said Tasneem Bhuyian.

Before COVID-19, Bhuyian worked as a certified nursing assistant in Michigan, where she lived with her husband and twin girls. But all of that changed, quickly.

"We just packed up and we came to Texas, because my whole extended family is here," Bhuyian said.

She gave up her job like millions of other women, and became a stay-at-home mom.

By early 2020, women were a majority of the workforce. But a year into the pandemic, much of those gains have been erased. Almost a million mothers left the workforce last year, and economists are sounding the alarm.

“What we have seen in this downturn has been unprecedented," said Heidi Shierholz, senior economist and director of policy at the Economic Policy Institute.

Women are still struggling to find balance, despite all of the relief bills passed in Washington. That’s why some lawmakers are calling for gender-specific measures.

Congresswoman Grace Meng introduced the Marshall Plan for Moms. Named after the financial assistance the U.S. provided to Europe after WWII, it would offer several benefits, like paid leave and affordable childcare, to women who left their jobs during COVID-19 to care for kids.

"This is one of the most important investments that we can make in our country," said Meng.

There is some global precedent for this. Across Europe, several countries have provided cash payments to women amid the pandemic. The bill was inspired by a petition that, among other measures, calls for direct payments to moms. But not everyone is on board with that part.

"The answer is not to pay mom for doing what's falling on her shoulders. The answer is to change the division of labor," said Debi Yadegari, founder of Villyge, a company that helps employers implement parent-friendly policies.

The proposal — introduced in February — has an uncertain path ahead in Congress, considering the $15 minimum wage measure that many Republicans are opposed to. And women have still lost more than 5 million jobs since February 2020.

Experts point out that many of the issues women face now existed before, and were simply exacerbated by the pandemic. There’s still some room for optimism, though: a vaccine rollout, stimulus bills that boosted child tax credits, and President Biden’s infrastructure proposal that includes child care aid.

"I am optimistic that we will quickly be able to unwind from the problems that were put in place just because of the pandemic, that we are hopefully now on the road to emerging from," Shierholz said.