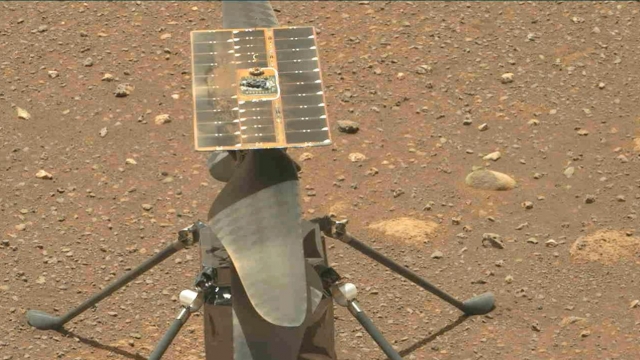 The Ingenuity helicopter contended with challenging conditions on the Red Planet, since Mars' atmosphere is 99 percent less dense than Earth.

The news was celebrated by NASA engineers, who didn't receive confirmation of the flight, and the stunning video, for over three hours.

Below the rotors, engineers had placed a souvenir from another first: a stamp-sized piece of fabric from the Wright Flyer, which made the first successful heavier-than-air powered flight in 1903.

"This really is a Wright Brothers moment," said Steve Jurczyk, the acting administrator of NASA. "It's a start of a whole new kind of planetary exploration."

The Ingenuity helicopter contended with challenging conditions on the Red Planet. Mars' atmosphere is 99 percent less dense than Earth's, meaning its rotors spin five times faster than they'd need to on Earth.

"We can now fly into craters," Thomas Zurbuchen, NASA's associate administrator for the Science Mission Directorate, told CNN. "We've never really observed them up close because of the fact that we can't reach it. We're imagining humans exploring in the future and having scouts that are flying ahead of them."

NASA has said it plans to send humans to the Red Planet as soon as the 2030s.