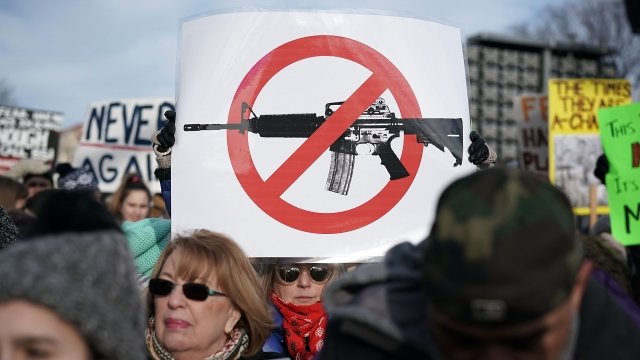 SMS
Parkland Parents Join Students In Fight Against NRA-Backed Politicians
By Katie Cammarata
By Katie Cammarata
May 31, 2018
The Families vs Assault Rifle PAC says its goal is to remove the NRA from the political system and ban assault weapons and bump stocks.
SHOW TRANSCRIPT

Parents of Marjory Stoneman Douglas High School students in Parkland, Florida, have created a super PAC to take on politicians backed by the National Rifle Association.

The Families vs Assault Rifle PAC website says its mission is two-fold: Remove the NRA from the political system and "amend the National Firearms Act of 1934 to include a ban on assault weapons, bump stocks, and high-capacity magazines."

The political director of the super PAC told CNN that the group isn't trying to challenge the Second Amendment but to "take out and restrict the ownership of the civilian equivalent of an M-16."

The super PAC was registered earlier this month. The group is asking individuals for donations of $17 — a dollar for every Parkland shooting victim.