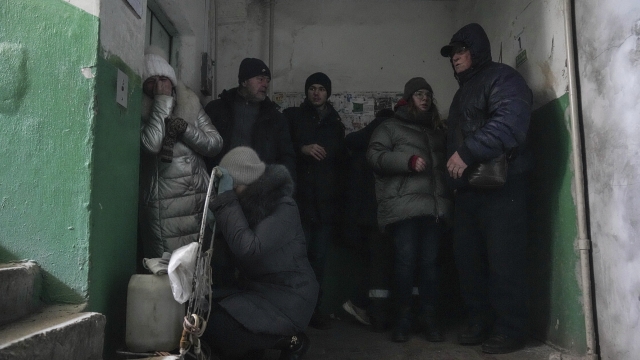 As midnight passes,  the nightmare enters it's 20th day.

Up against a tough Ukranian military and it's own shocking incompetence, Putin's army has so far shown itself fully capable of one thing only — terrorizing the innocent.

Mariupol has become exhibit-A of the slaughter of civilians.

The death toll, according to city officials is at least 2,500 and expected to rise. The deaths are not only from bombs — 100 of them in the past 24 hours, according to a member of parliament — but also from starvation, according to the International Red Cross, which it says is imminent.

Signs of hope are fleeting. A pregnant woman who was photographed fleeing from the bombed maternity hospital gave birth to a baby girl but another pregnant woman later died, along with her unborn child.

And now there are new fears the war could hit western Ukraine, which has so far been spared.

On Sunday in Lviv opera singers sang the national anthem just hours after Russian cruise missiles hit a military base outside the city near the border with Poland. Ukraine's Defense Ministry says the strikes killed 35 people and injured 134 others.

Lviv Mayor Andriy Sadoviy says the attacks, which could be seen from across the Polish border, sends a message to his NATO neighbor: Russia could target Poland as well.

NEWSY'S JASON BELLINI: What type of defense do you have for the sky here in Lviv? And have you spoken to your counterparts in Poland about the possibility of them providing some defense?

ANDRIY SADOVIY: After yesterday's talks with Polish politicians, I came to understand that they start[ed] realizing that the missiles that [have] hit the territory, which is 20 kilometers from the Polish border, could also hit their ground. I keep asking them the question, 'What will you do if it hits your territory?' And they are shocked and they cannot answer. So I guess that air defense system could probably be placed here for not a single missile to fall.

There are patriot missile batteries now protecting Poland, but NATO has made it clear that Ukraine doesn't fall under the alliance's umbrella. And the mayor left it unclear what sort of air defenses he has to protect a city that's providing sanctuary to hundreds of thousands of refugees.

Nearly three million people have now fled Ukraine to neighboring countries. Every displaced life a testimony to the pointlessness of this war. The heartbreak has been captured in final social media posts, like one where a woman is dusting off her piano, playing Chopin as a final serenade to a life left behind.