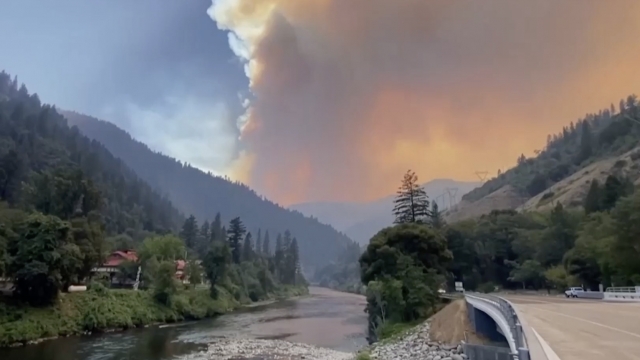 Ben Bell worries his Northern California home is in danger.

Near the tourist town of Belden, a raging wildfire forcing evacuations over the weekend. It’s one of 16 major fires burning in the Pacific Northwest.

Bell said, "We're having a lot of fires every year and they're really, really bad. Just the mixture of hot, dry and drought and struggling trees, stressed forests, poor forest management."

Firefighters battling the blazes overnight and prepping their trucks to head out as the Dixie fire now threatens the town of Storrie in Plumas County, California.

Dixie Fire Public Information Officer Antonio Negrete said, "A lot of smoke and there's a lot of emergency vehicles that are traversing that road in order to get to areas and we felt just in an abundance of caution it would be better to close the road and protect the citizens in that area."

Even more evacuations from a different fire south of Lake Tahoe near the California–Nevada border.

The Tamarack fire jumped a highway – burning a few buildings.

Hundreds of firefighers battling the flames as they spread toward the small town of Markleeville, cutting firelines in an attempt to contain the blaze.

To the north, wildfires buried deep in the Oregon forests. Firefighters sweltering in the heat of the fire and high temperatures putting out hot spots before the fires spread.

In neighboring Washington state fires sweeping across the landscape. Homeowners in Wenatchee watching as the flames rushed towards the 1,500 homes in their neighborhood.

The smoke from the fires blowing east as you can see in this satellite loop. It’s covering parts of the Great Lakes and northeast.

Long-term droughts and heat waves directly tied to climate change fanning the wildfires, expanding the fire season, increasing the number and intensity of the fires.

Back in Northern California Ben’s house is OK, but the devastation is overwhelming.

He said, "Oh, it's just sad, actually. I think about our forests burning down and disappearing, you know. The trees and the animals and everything being destroyed and killed."

The fire conditions, like what we’re seeing now in mid-July, normally don’t appear until the fall.