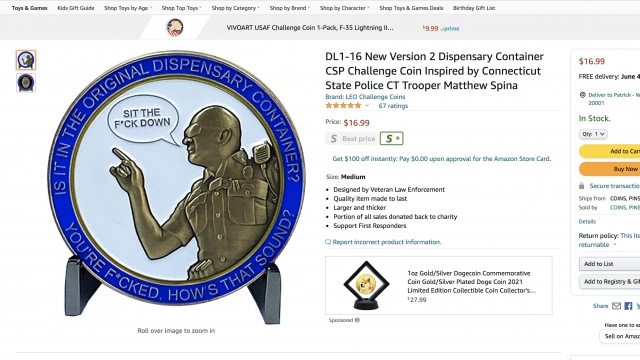 A year later, a Newsy investigation has found four of these same well-known brands allowing the sale of souvenir coins from third-party sellers that depict scenes of police misconduct.

For generations, commemorative challenge coins have been used and traded as small, collectible tokens of appreciation or reward.

They have no monetary value.

Presidents give the coins out, as do leaders in the military and on police forces.

The unofficial challenge coins Newsy found for sale on some of the largest online marketplaces are different.

They are mementos of misbehavior by law enforcement.

"What we’re talking about here are challenge coins that commemorate and really celebrate some problematic aspects of policing," said Seth Stoughton, a former police officer and now law professor at the University of South Carolina.

He testified as an expert for the prosecution in the trial against Derek Chauvin, Floyd’s killer.

Amazon called for a stop to the "inequitable and brutal treatment of Black people."

Yet the retailer was selling a coin memorializing viral video of a 2019 traffic stop in Virginia.

A White trooper is seen yanking a Black man, who has his hands up, out of the car and to the pavement.

Virginia State Police condemned the trooper’s actions and fired him.

On the coin, the trooper is carved on the heads side with his profane quotes etched on the rim.

Amazon’s listing for the keepsake disappeared after Newsy asked about it, but you can still buy another coin on the site, one that depicts the time a short-fused Connecticut trooper cussed out a driver he pulled over.

Still, the Hartford Courant wrote, the coin was "circulating among his fellow troopers."

After Floyd’s murder, Etsy took a stand "against police brutality in all forms."

But Etsy was also selling the coin with the Connecticut trooper and the one with the ex-Virginia trooper.

Etsy’s listing for the coin vanished when Newsy reached out to ask: Why sell these?

Neither Amazon nor Etsy ever responded to that question.

Last year an eBay senior vice president wrote on social media "there is no place for hate or violence in our community, and we will do whatever we can to affect change."

But eBay recently allowed the sale of a coin commemorating riot teams’ response to unrest in 2015, with the words "the Baltimore six" — apparently a reference to the six officers involved in the arrest of Freddie Gray who died in police custody.

The company declined to talk about it.

"I’m not thrilled that retailers are fulfilling this market demand but I’m far more concerned that there is a market demand for this," Stoughton said.

Walmart’s marketplace site also was offering the coin of the Connecticut officer, a year after Walmart's CEO spoke out against Floyd's death.

When Newsy asked about the coin, Walmart took it offline.

A spokeswoman said the item was inappropriate.

"We do have a robust set of processes and rules in place to prevent content like this from being on our site, but every so often something makes it through," said Carrie McKnight, senior director of global communications for Walmart.

He said he designed the Connecticut and Virginia coins Newsy found on major retail sites.

Gregory said they are pop art: a form of expression not meant to celebrate anything but to instead mark a moment in time.

"It’s up to the public to decide how the art makes them feel and whether they view it as a positive, a negative or perhaps as neither," Gregory said.

He offers souvenir coins for all kinds of events.

He would not disclose how many police misconduct coins he has sold or who is buying them.