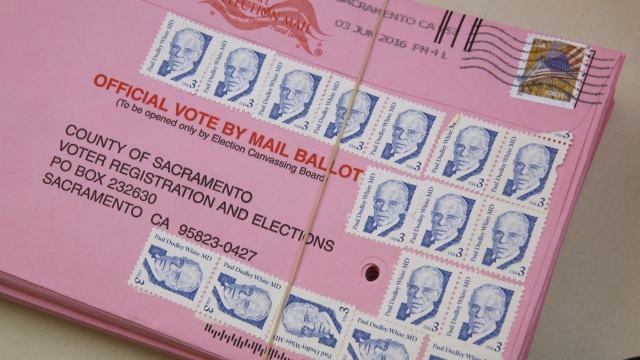 SMS
Thousands Of Rejected Mail-In Primary Ballots Spur November Fears
By Sasha Ingber
By Sasha Ingber
July 13, 2020
With the general election less than four months away, how voters can safely, reliably cast their ballots amid the pandemic is still being debated.
SHOW TRANSCRIPT

With the general election less than four months away, how voters can safely and reliably cast their ballots during the pandemic is still up for debate.

New reports find a number of mail-in votes were cast aside this year — enough to sway a close race come November. More than 100,000 ballots were rejected in California’s presidential primary alone, according to The Associated Press. Thousands more were rejected across the country, according to an NPR analysis. The main reason they were ignored: They arrived too late to be counted due to delays in the mail.

Newsy spoke to Ben Hovland, the head of the U.S. Election Assistance Commission, which helps states prepare for elections.

"Are you concerned about the pressure this is going to put on the postal system?"

"Certainly that's a concern. One of the things that they did to assure us was say that while this may be more mail ballots than than we've ever seen before, the post office is designed for a volume that far exceeds elections in the sense of you think about the holidays or Mother's Day when they've got, you know, millions and millions of cards in the mail," Hovland says.

Hovland says despite some bumps in the road, states are doing a good job of preparing. But whether they should extend their deadlines and accept all ballots postmarked by Election Day is a tug of war between disenfranchisement and security.

"We want to strike a balance between having a window that’s sufficient for people to have their ballot executed, but also have enough time for administrators to do their jobs well," says Celina Stewart, senior director of advocacy and litigation at the League of Women Voters.

She tells Newsy the organization has filed lawsuits across the country — including in New York, where a staggering 14% of mailed ballots in 2018 were discarded because of verification requirements like signature matching.

"We have lawsuits like in North Dakota, New Jersey, New York, places like that, to make sure — what are the reasons for those ballots being declared defective? Is it a signature, a lack of signature, is it postage? What are those? How can we remedy those in advance?" Stewart says.

They’re asking for a Notice and Cure Period, which would allow voters a chance to correct errors that led to their ballots being rejected — and also could delay election results.

It comes as President Donald Trump continues to sow doubt about mail-in voting, recently claiming, “People are just now seeing how bad, dishonest and slow it is.”

"With elections, we see that the 50 states run elections 50 different ways," says Hovland. "The biggest advice that I can give to Americans who are watching this and thinking about how they're going to interact or vote this November is do things as early as you can."