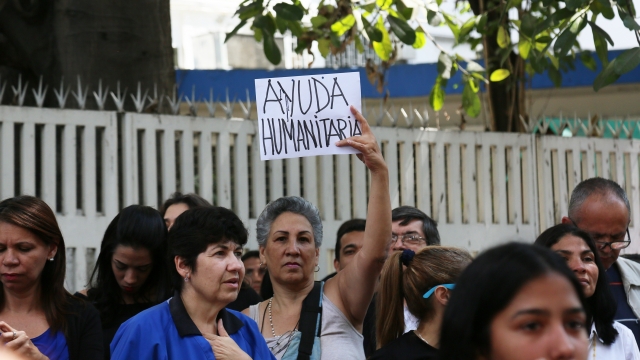 Maduro met with top officials of the International Committee of the Red Cross on Tuesday. He said on Twitter, "We ratify our willingness to establish cooperation mechanisms for international assistance and support."

ICRC President Peter Maurer has been in the country since Saturday to re-affirm the organization's commitment to helping the Venezuelan people. In a statement, the ICRC said it's concerned about the "lack [of] access to basic services" Venezuelans are facing.

Venezuela's ongoing humanitarian crisis only worsened after the county's presidential election last year. Maduro was re-elected for another six years in power, but several countries and political leaders accused him of rigging the election.

Then earlier this year, the leader of Venezuela's National Assembly, Juan Guaidó, declared himself interim president until new elections could be held. He's been recognized by multiple countries, including the United States.

Both Maduro and Guaidó have since used relief distribution to score political points.