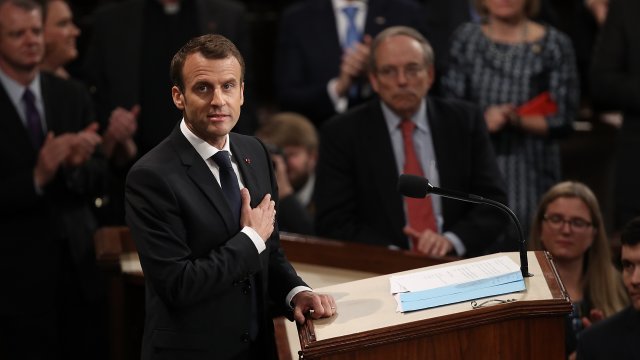 SMS
Macron Pitches Congress On His Globalist Vision
By Matt Picht
By Matt Picht
April 25, 2018
The French president called for the U.S. to stay in the Iran nuclear deal during his speech to a joint session of Congress.
SHOW TRANSCRIPT

French President Emmanuel Macron is still trying to keep the U.S. involved in international affairs. He made that obvious during his address to Congress.

Macron told Congress: "The United States is the one who invented this multilateralism. You are the one now who has to help preserve and reinvent it."

During his state visit to the U.S., Macron is trying to sway President Donald Trump away from his nationalistic foreign policy. Among the most urgent issue is the Iran nuclear deal, which Trump is threatening to tear up.

Macron says he recognizes Trump's concerns about the deal but argues those should be worked out in a separate agreement. 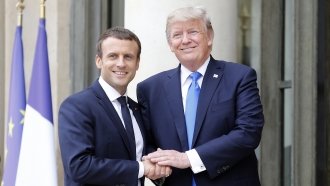 Is The Trump-Macron Bromance On?

"We should not abandon it without having something more substantial instead. That's my position," Macron said.

Macron also talked about working together to address climate change, inequality and misinformation. The French president painted these threats as a fundamental danger to global stability.

The French president often casts himself as a global leader. During an address to European Parliament, Macron told Europe to avoid "selfish nationalism" and help build a stronger European Union instead.

But with increasing labor strikes back home and sinking popularity, Macron may be running low on political capital he needs to push his vision of the world abroad.