Lt. Colonel Testifies About Listening In On Trump's Ukraine Call 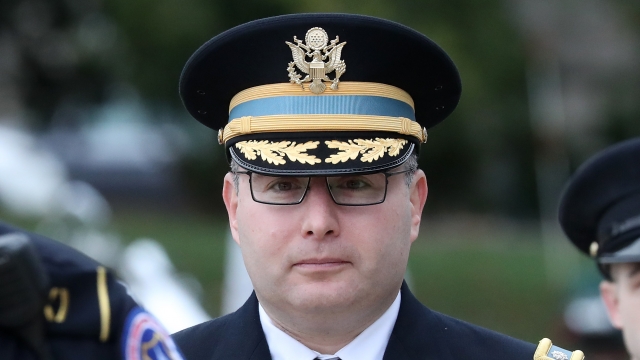 In arguably the most damning testimony yet, the first current White House official to testify in the ongoing impeachment inquiry recounted his reaction to the president's phone call with Ukrainian President Volodymyr Zelenskyy, calling it concerning and worrying.

Vindman's also the first person to testify who directly heard President Trump's calls with Ukrainian President Volodymyr Zelenskyy. One of those calls was later the subject of a whistleblower complaint. Vindman says he was not the whistleblower.

In his opening statement, Vindman told members of three committees about the now infamous calls from his vantage point.

On April 21, 2019, Vindman says President Trump called President Zelenskyy to congratulate him on his election victory. Vindman described that call as "positive."

According to Vindman, the first signs of problems surfaced on July 10. That's when he says a top Ukrainian official visited Washington for a meeting with national security adviser John Bolton and others, including the U.S. Ambassador to the European Union Gordon Sondland. The Ukrainian's goal: to secure a meeting between Presidents Trump and Zelenskyy.

Vindman told lawmakers, "Ambassador Sondland started to speak about Ukraine delivering specific investigations in order to secure the meeting with the president, at which time Ambassador Bolton cut the meeting short."

Vindman added: "Following this meeting, there was a scheduled debriefing during which Ambassador Sondland emphasized the importance that Ukraine deliver the investigations into the 2016 election, the Bidens and Burisma. I stated to Ambassador Sondland that his statements were inappropriate, that the request to investigate Biden and his son had nothing to do with national security."

This is significant because it alleges a quid pro quo. It could indicate Ambassador Sondland was lying when he testified that he didn't remember any mention of the Bidens.

Vindman says he was listening from the White House Situation Room as President Trump called President Zelenskyy on July 25.

Vindman testified: "I was concerned by the call. I did not think it was proper to demand that a foreign government investigate a U.S. citizen, and I was worried about the implications for the U.S. government's support of Ukraine."

Vindman is the top expert on Ukraine inside the National Security Council. He's a decorated veteran and was even awarded a Purple Heart. But some of President Trump's allies have accused him of a "dual loyalty," smearing him because he was born in Ukraine.

Vindman's testimony comes two days before the full House will vote on procedures for their impeachment inquiry, an indication from Democrats they won't back down even as the president claims no wrongdoing.