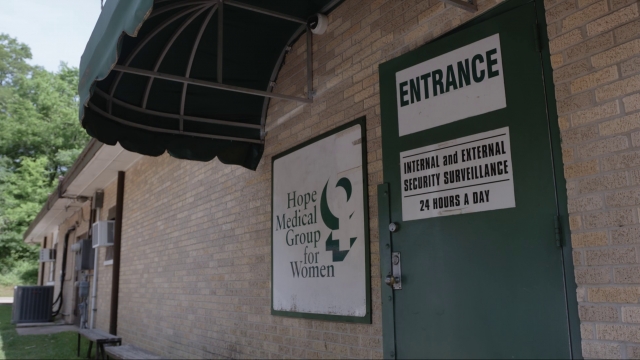 The license plates on the cars that crowd this parking lot are all from Texas. But we're not in Texas. We're in Shreveport, Louisiana.

Latricia had to drive three hours from Houston to bring her niece to Hope Medical Group for an abortion. Long wait times and transportation issues provided roadblocks that almost prevented her niece from getting care.

"This was like her last resort, her last appointment. So we'll get it done here. She tried everywhere else," Latricia said. "It doesn't make sense at all, why we have to leave home to get care that we have the right to get."

But in her home state, those rights just aren't the same anymore. A 2021 law effectively bans abortion in Texas after about six weeks — and if the leaked Supreme Court draft opinion becomes the final opinion, access will become even more limited for women across the country.

Before the Texas law, 18% of the patients here were from Texas.

Clinic Director Kathaleen Pittman says the spillover from Texas, in conjunction with already restrictive abortion laws in Louisiana, has created an incredible backup in her clinic. Previously, most abortions were done between six and 10 weeks with a two-dose pill to end pregnancy. But because of the long wait list to get an appointment, now most women will need a surgical procedure.

"By the end of September, we were running 37% Texas. By the end of October, we were at 57% Texas. And it kept going up. At one point we were like at 73%," Pittman said. "The majority of them are 10 through 13 [weeks]. And we've doubled the number of second-trimester cases. On any given day, we have anywhere from 120 to 150 people on our waiting lists, just for us to call them and make that initial appointment."

Pittman is sending women to New Mexico for the abortion medication, but she's worried about the women who are timing out for care. The clinic only performs abortions through 16 and a half weeks. By law, it also must hold two appointments with the patient — one for consultation, and then after a 24-hour waiting period, one for the actual procedure.

"A lot of women do not understand," Pittman continued. "Why should I have to come twice? This is all I've thought about since I had a positive test ... . So, for legislators to think that women haven't given it enough thought is more than laughable. It's actually just, it's just wrong."

Latricia and her niece had to get a hotel room, which is a setback that costs both of them time and money. But she recognizes if this situation had happened in another few weeks, her niece would have no easy option.

Pittman is trying not to worry yet, but this clinic would be shut down if the leaked opinion stands.

"Take a deep breath, reassure the staff, reassure the patients: 'You're here and now we'll take care of you now. I just don't know if we can in the future,'" Pittman said.

Louisiana is one of more than a dozen states with a trigger law, meaning if Roe is overturned, abortion becomes illegal in those states overnight. Women in Louisiana will be forced to drive, on average, the furthest in the nation for care. A total ban would force the driving time from 37 miles to a clinic to a whopping 666 miles for care. The closest states for most women would be Illinois or North Carolina. That's a 1,720% increase in mileage.

"Nobody cares about the women. No, certainly not the politicians," Pittman said.

Forty years ago, there were 18 abortion clinics in the state of Louisiana. Ten years later, the number stayed relatively stagnant at 17. But by 2014, decades of anti-abortion legislation had forced most facilities to close. Now there are only four operational facilities in the entire state.

Jodi Burns is doing a different kind of planning.

"We're set up for a post-Roe society," she said. "I believe that we are going to need to increase, continue to expand our services."

She's the executive director at Heart of Hope, which is just about 20 minutes from the clinic. The massive property houses, educates and takes care of young girls as they navigate their pregnancy and early motherhood. The community-funded program is expanding now in preparation for the Supreme Court decision, adding care over the phone and adding more apartments on their property.

"I really feel like we have really turned a corner where we are," Burns said.

While Burns says abortion is free to exist in other states, if the Supreme Court sides in her favor, she doesn't want to see the option in hers. She believes education and available resources will change the minds of women needing care.

But Latricia, who once pushed through crowds of protesters to have her own abortion, is at peace with her decision.

"There was no way I could have done that," she said. "I have five children now. So I made the right decision."

But women who live exactly where she does, who are in a similar place in life, may not have the chance to dictate their future — and if they do, it will likely be expensive or unsafe.