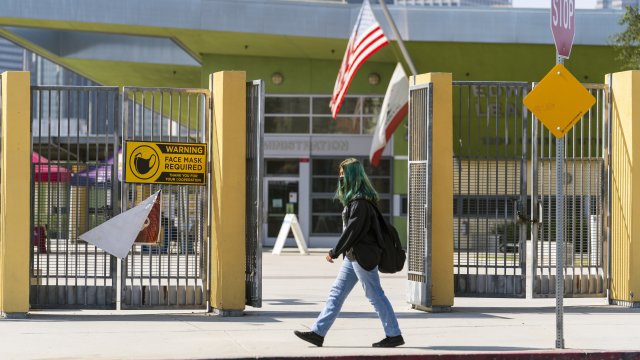 SMS
Los Angeles Schools Mandate Vaccines For Students 12 And Up
By Associated Press
By Associated Press
September 10, 2021
Students in sports and other extracurricular activities must be fully vaccinated by the end of October and all others students by Dec. 19.

Students age 12 and older in the Los Angeles public school system soon must be vaccinated to attend classes on campus under one of the toughest anti-COVID mandates enacted in the nation.

The board of the Los Angeles Unified School District voted Thursday to require students age 12 and up to be fully vaccinated — with those who take part in sports and other extracurricular activities receiving both of two shots by the end of October and all others by Dec. 19.

Students who can't show proof of vaccination won't be permitted to have in-person learning following the end of winter break on Jan. 11 unless they have a medical or other exemption.

"This action is not about violating anybody's rights," school board member Monica Garcia said. "This action is about doing our job to be able to offer public schools that children can come to school and be safe."

The nation's second-largest school district was the largest in the U.S. to issue such a mandate. Nearby Culver City Unified School District imposed a similar policy last month for the 7,000-student district.

New York City's school system, the nation's largest, has only mandated vaccinations for 20,000 student athletes in certain sports considered at high risk of spreading the virus, including wrestling.

Los Angeles Unified, which has 630,000 students, has moved more aggressively than most districts in enacting COVID-19 safety measures. It tests all students and employees every week, requires masking indoors and outdoors and has ordered employees to be vaccinated.

The district was among the last of the nation's largest school districts to reopen to classroom instruction last spring. The teachers union opposed the move for months, citing health concerns.

The union applauded the new mandate, which it sought after teachers were ordered to get the shots.

"COVID-19 is mutating, being transmitted to our students, and vaccines remain our community's best line of defense to prevent continued spread of disease," said Cecily Myart-Cruz, president of United Teachers Los Angeles.

The district's student population is nearly three-quarters Latino and many are poor. Among adults, poor Latinos are vaccinated at a lower rate than the state average.

Los Angeles County had an increase in coronavirus case rates in children from mid-July to mid-August but these have since declined, said Barbara Ferrer, director of the county's Department of Public Health.

Between Aug. 15 and Sept. 7, nearly 8,000 student cases and more than 1,200 staff cases of coronavirus were reported in the county, most of them in Los Angeles Unified, Ferrer said.

The coronavirus has been far less lethal for children than for older adults but they can pass on the virus to others, health officials have said.

More than half of Los Angeles County residents between 12 and 17 are already fully vaccinated, and "increasing these numbers is a critical part of our strategy for keeping schools open," Ferrer said.

The school district's mandate could inspire similar actions in other cities, while likely sparking legal challenges from people opposed to vaccination, masking and other COVID-19 regulations.

Some parents spoke against the mandate at the Los Angels Unified meeting, arguing that they should decide what is best for their children.

"We don't understand why you are so rushed," Diana Guillen, chair of the district's English learner advisory committee, told the board in Spanish. "This decision should be ours, a family decision."

But many parents and school board members overwhelmingly supported the plan, calling it a sound public health measure and a critical step to keep classrooms open for the in-person learning so essential for students.

Board member Jackie Goldberg recalled when polio infections happened at her school and her friend in third grade lost his arm.

"It is our moral, ethical, religious, political — pick a word — it's our responsibility to protect the children under 12 who cannot get protected any other way," she said.

Only the two-shot Pfizer vaccine has received full federal approval for people 16 and older, while children ages 12 to 15 can be vaccinated under a federal emergency use authorization.

On Thursday, President Joe Biden urged people to vaccinate their children, saying "almost all the serious COVID-19 cases we're seeing among adolescents are in unvaccinated 12- to 17-year-olds — an age group that lags behind in vaccination rates."

An August poll from The Associated Press and the NORC Center for Public Affairs Research found that 55% of adults surveyed supported a vaccine mandate for students 12 and older, although that figure dropped to 42% among parents.

Some parents are eager for all eligible students to be vaccinated. Lucy Rimalower, who has a kindergartener in the Los Angeles Unified district, said she is relieved officials are taking steps to try to protect her son until he is old enough to get his shot. She said that also helps protect her parents, who are in their 60's and 70's and help her with child care.

"This feels like following the precedent of all the other vaccines over time that have helped us to have a safer school environment, that lets us feel like it's safe to send our kids to school without getting chickenpox, polio, the mumps, measles, rubella, you name it," Rimalower said.