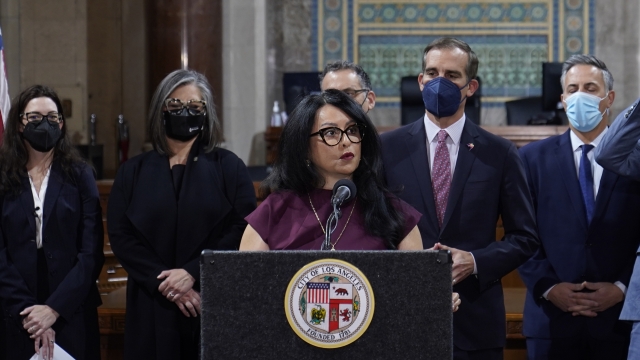 Nury Martinez stepped down from the presidency but still remains on the City Council, amid calls for her removal.

Nury Martinez, Los Angeles' City Council president, stepped down from that post on Monday after a firestorm around a slew of racist comments she made in leaked audio. She's facing a growing chorus of calls to leave her City Council seat entirely.

The resignation comes after the Los Angeles Times published the audio of Martinez making racist remarks about Mexican Angelenos and the Black son of a White colleague.

While speaking to other city leaders in a private meeting, she described the colleague's Black son as behaving "like a monkey."

"They're raising him like a little White kid, which I was like, this kid needs a beat down. Let me take him around the corner, and then I'll bring him back," she said in the audio.

California Democratic Sen. Alex Padilla said in a statement Monday that Martinez and the other two Council members present for the meeting should resign their seats.

"I am appalled at the racist, dehumanizing remarks made by Los Angeles city officials and leaders that were made public yesterday," he said. "As a father, I am offended that an innocent child was a target of these remarks."

In another moment, Martinez describes the racial makeup of a neighborhood known as Koreatown, using a racial trope often used against Oaxacans.

"I see a lot of little short, dark people," she said.

They're just a few of a string of offensive comments recorded in the meeting.

Martinez apologized over the weekend and said Monday, "In the end, it is not my apologies that matter most; it will be the actions I take from this day forward. I hope that you will give me the opportunity to make amends."

But powerful voices like Padilla and the two remaining candidates for Los Angeles mayor want Martinez out, along with Council members Kevin de León and Gil Cedillo.

They failed to shut down the racist jabs, and de León even played into them after Martinez called a White council member's Black son his "accessory."

De León, who ran for mayor earlier this year, compared the boy to a purse, like "when Nury brings her Goyard bag or the Louis Vuitton bag, él trae su accessory, él trae a su negrito, like on the side," de León said.

The horrifying audio exploded into a massive political scandal — a sad reckoning with the persistence of hate.