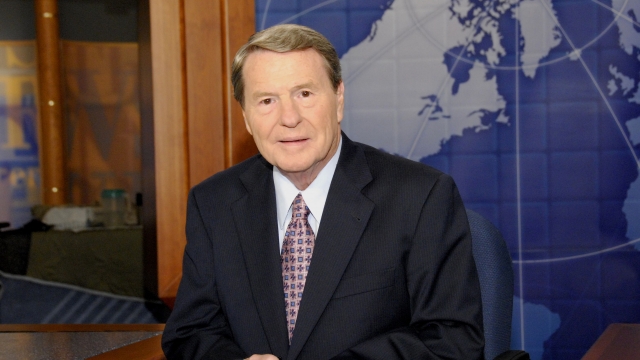 Longtime TV journalist Jim Lehrer has died at 85 years old. He was the co-founder of "PBS NewsHour" and anchored for the show for 36 years before retiring in 2011.

Judy Woodruff, the current anchor and managing editor of "PBS NewsHour," announced Lehrer's death in a press release on Thursday.

In one colleague's words, Lehrer "set the gold standard for broadcast journalism in our nation and devoted his life to a vital public service." Over the years, his work earned him several accolades, including the National Humanities Medal, being elected a fellow of the American Academy of Arts and Sciences, and being inducted into the Television Hall of Fame.

He moderated more presidential debates than anyone else in U.S. history and interviewed leaders from all over the world. He also wrote 20 novels, three memoirs and four plays.

Lehrer attended Victoria College in Texas before studying journalism at the University of Missouri. After college he served in the U.S. Marine Corps for three years, but then reported at various newspapers in Dallas, where he covered the assassination of President John F. Kennedy. He transitioned to television, and in 1975, after covering the Senate's Watergate hearings, he and Robert MacNeil established a show that would become "PBS NewsHour."

In a tribute to Lehrer and his career, PBS said, "As an anchor of several iterations of the NewsHour, Jim reported the news with a clear sense of purpose and integrity —  even as the world of media changed around him."

He is survived by his wife, Kate; three daughters, Jamie, Lucy and Amanda; and six grandchildren.