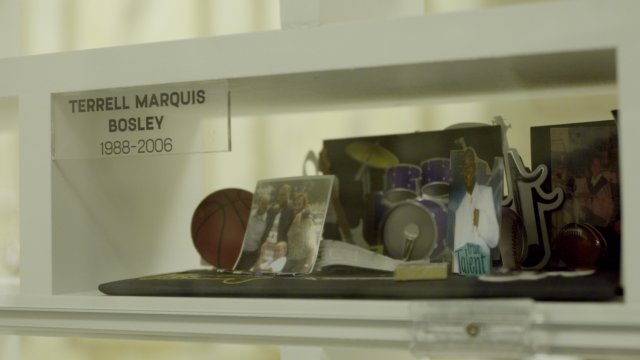 Memorials commemorate the past. Whether it's a person or event, positive or painful, they serve as a reminder of our history. But born in the heart of Chicago's Cultural Center is a living memorial, embodying a crisis the United States faces today, gun violence.

Four glass houses hold the belongings of victims who died by gun violence. Each house-- made up of 700 bricks-- for the 700 Americans killed by guns every week on average, according to 'Everytown for Gun Safety.'

Michael Murphy is the founding principal and executive director of mass design group. Murphy and his team designed several memorials including the National Memorial for Peace and Justice.America's first memorial acknowledging the victims of racial terror lynchings.This is where two moms from Chicago asked Murphy to honor their children.

"So Terrell is my oldest son, and he was jolly. He loved life. He loved living. He was in a lot of plays. He played football. So he was always doing something pleasing his mom, and pleasing himself." Pam Bosley lost her son Terrell Bosley to gun violence in 2006. Her last phone call with him was on the day he died. She said she warned him about a shooting that day.

"And he was like ma, you always worry. I'm at church. I'll be home. And that was my last call, last conversation I had. He was telling me don't be worried, he'll be home," Bosley said. "And the next call I got was his girlfriend telling us that he had got shot at the church. And it's still in my heart I thought that he was gonna make it, but they say he stumbled back into the church and the place he loved, he died. So yeah, that's, that's my son."

Bosley shared this story and photos of her son with Murphy, along with another mom Annette Nance-Holt who shared the loss of her son Blair. "Like six months after that conversation he actually called us to say he wanted to do something in Chicago, and that's when he started talking about the bricks and putting our children's artifacts in the bricks and the houses," Bosley said.

Bosley and Holt are the co-founders of Purpose Over Pain, a Chicago organization working to prevent gun violence. The organization partnered with the MASS Design Group for the memorial. Jha D. Williams managed the project. "I will not breathe until these moms and these family members arrive tomorrow. When they say it's good, then it's good," Williams said.  She meticulously curated every donated item, and her team faced an immense challenge.

"We were going to have to be able to capture the enormity of the issue... be able to relay and help someone understand these statistics while also being sure that you walked away fully understanding the individual narrative. And we had to figure out a way to do both," Williams said.

The AIDS Memorial Quilt, displayed in 1987, was a helpful starting point. In that project, an activist asked families of victims of the aids epidemic to contribute a quilt square. "It covered the entire national mall. This changes lives, this changed policy," Murphy said. This inspired the donations. Partners also collaborated to include audio and visual interviews from those who donated, highlighting how gun violence rears its ugly head in many forms.

"It wasn't just black lives. We lose a lot of our black children, but in the house it's different races. So we're under one umbrella and we felt like, as the parents come in and out, our angels are together," Bosley said. Both Williams and Bosley say the exhibit is meant to change the cultural narrative around gun violence. And culture can change policy by, as Murphy said, connecting to the human dignity of those lost.