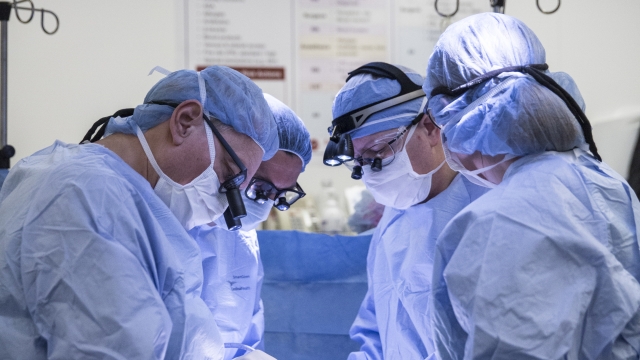 SMS
This Kind Of Uterus Transplant Hasn't Been Done In The US — Until Now
By Lindsey Pulse
By Lindsey Pulse
October 13, 2016
A team of surgeons at Baylor University Medical Center performed uterus transplants on four women last month — three were unsuccessful.
SHOW TRANSCRIPT

For the first time in the U.S., surgeons have performed living-donor uterus transplants — and it's a bigger deal than you might think.

A team of doctors at Baylor University Medical Center in Dallas are currently performing trial uterine transplants on 10 women with various infertility issues. Four of the transplants were completed last month.

Three of those attempts failed — the wombs had to be removed because of poor blood circulation. The fourth transplant is showing some promise, though.

Worldwide, there have only been 16 other uterus transplant attempts. Of those, only a fraction actually worked.

The Baylor trial was modeled after a trial in Sweden. A team there spent more than a decade researching uterus transplants. In 2014, a 36-year-old patient became the first woman in the world to give birth via a donated uterus.

The only other uterus transplant performed in the U.S. happened in February. A 26-year-old mother of three adopted children received a womb from a deceased donor in Cleveland, but it had to be removed because of a yeast infection.

So what makes uterine transplants so tricky? Well, they're not exactly designed to be permanent.

The team at Baylor says since the transplant is not lifesaving like a kidney or heart donation, once a women has one or two successful pregnancies, they'll have to get a hysterectomy.

Still, the team hopes the success of this transplant will help women around the world. They said if the trial works, they'll open the option "to every woman who is willing to undergo a transplant to have a child."