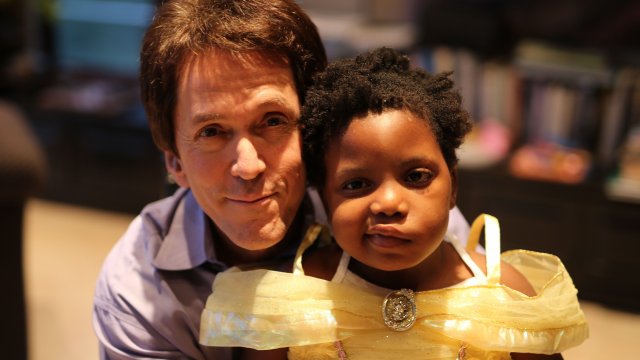 A rare pediatric brain cancer brings a little girl into the life of Mitch Albom, author of "Tuesdays With Morrie."

In the days after the 2010 earthquake in Haiti, a pastor told Mitch Albom he could not get a call through to his orphanage in Port-au-Prince.

“Something about that just moved me,” Albom recalled in an interview with Newsy.

The “Tuesdays With Morrie” author organized a trip to Haiti to check on the orphanage.

He found the building still standing, an oasis with children somehow still full of optimism in the middle of rubble, death and desperation.

“They still had this joy for living, this amazing toughness,” Albom said.

He soon took over operation of the orphanage, flying in a team of volunteers to build showers, a new kitchen and dining room, and school.

“Even the first real toilets the kids ever had,” he said.

Several years in, a 3-year-old girl named Chika Jeune born days after the earthquake arrived at the orphanage.

“She was our youngest kid and our bossiest kid,” Albom said. “She was just hysterical.”

Her needs would soon go beyond what anyone in Haiti could handle.

“I got a call that there’s something wrong with her, her face is droopy,” Albom said.

He took Chika to the only MRI machine in Haiti.

“The report was two sentences,” Albom said. “There’s a mass on this child’s brain and whatever it is, there is no one in Haiti who can help. And that changed everything.”

Albom and his wife Janine Sabino decided to bring Chika home to Michigan for a diagnosis.

Chika was given four months to live.

The little girl moved into Albom and Sabino’s home and into their hearts.

They began a medical journey together in search of a key to unlock the cancer’s cruel odds.

“It made us a family,” Albom said. “And that is the greatest gift I think you can ever be given, especially by a child.”

Chika lived far longer than doctors predicted, but after two years her body could take no more.

She died shortly after her princess party to celebrate her 7th birthday.

Albom and Sabino were at her bedside.

“I felt like I was supposed to save Chika, and when I was not able to save Chika I was angry at myself, at God, at the world, at the medical community and all those things,” he said.

Albom’s lessons learned from a dying college professor led him to write “Tuesdays With Morrie.”

Now his reflections on the short life of Chika are in his new book, “Finding Chika.”

“She opened my eyes to a million lessons,” he said. “We did not lose a child. We were given a child, and that’s the way I choose to look at it, the positive message and feeling Chika has left me with after all this time.”

All proceeds from the book go to his Have Faith Haiti Mission & Orphanage, home to 52 children.

“My third act of life is going to be those kids and making sure that they are carried,” Albom said.