How These Muslim, Jewish And Christian Musicians Play Beyond Barriers 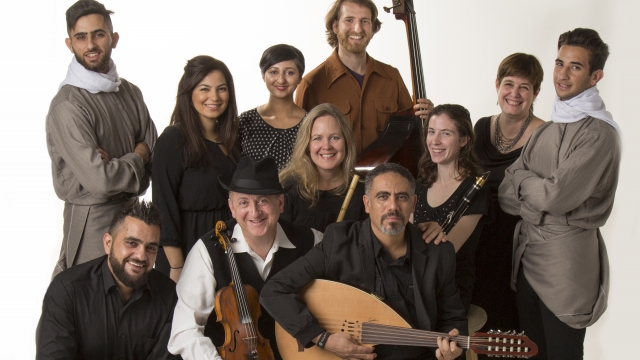 A group of Muslim, Jewish and Christian musicians have been celebrating their musical heritage together for almost two decades by performing each other's repertoires. They're called The Salaam-Shalom Music Project. The name means "peace" in Arabic and Hebrew.

"When you learn music, you actually deepen your own feelings and you begin to understand things that may have just seemed foreign or different before," said Lori Lippitz, the project founder.

The musicians are from the U.S., Middle East and Eastern Europe. And they perform folk songs in Arabic, Hebrew, Urdu, Yiddish, Russian and French.

"Instead of obsessing on developing a specific kind of music repertoire, it's more a potluck of bringing everybody together, and bringing different music styles together," explained Joey Spilberg, the group's bassist.

"Divisions are everywhere," vocalist Yasmin Ali said. "I hope that by seeing people collaborating on stage and finding commonality in a very beautiful and harmonious way, they can just take something from that and apply it in their own lives. "

"There are very serious problems that are causing Jews and Muslims to be confronting each other, specifically in Israel and Palestine," Lippitz said. "No one is making light of that or saying that it's easy to solve. But there really isn't such a great deal of difference in us as people."

"It's not enough to see the news and feel sorry about it and turn the TV off," said Amro Hosny Helmy, vocalist and oud player. "We need to say something; We need to do something. I do what I know: I play music."

"I grew up in a very traditional Muslim community," Ali said. "My parents are amazing, but they grew up in a community where they were told not to openly embrace everyone, unfortunately. They had to fight hard to overcome those prejudices, and they did."

"We were raised with the belief that no matter who is in front of you, you treat them like they're just like you. If you are comfortable in your life, find ways to become uncomfortable and to grow from it," Ali said.

"I belong to the Jewish community," Lippitz said. "And it pains me when I see factions of my community — small factions — creating walls where there are no walls, creating stereotypes about 'them' and 'those people,' about people they don't know anything about."

"But how can you get to know people in the Muslim communities of Chicago, for example, unless you have a reason to get together with them. And this is a reason," Lippitz said. "The reason is: We're playing their music. They're playing our music. We're dancing together. I mean, what could be better?"