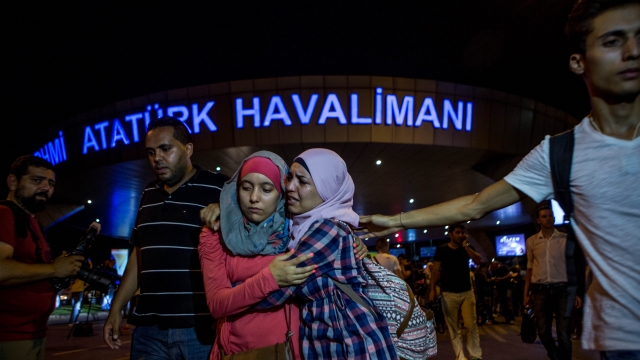 "A big blast happened inside the airport. It was very big. It was very bad. Others have said there was also gunfire, but I didn't hear," a man told CCTV.

"Chaos and blood and people running around," Judy Favish said of the scene she saw.

"People were very badly injured. One guy had holes in his back from shrapnel or from glass," an American man who witnessed the attack told CBS.

Sue Savage told CNN she heard gunshots and then an explosion. She hid in various rooms for more than an hour  before authorities escorted her out.

"There was a lot of blood. It was obviously a place where one of the suicide bombers had blown themself up. There was a huge pile of still-damp blood, and that was a couple of hours after," Savage said.

The attack, which involved three suicide bombers who shot people before blowing themselves up, left at least 41 dead and more than 200 injured, according to Istanbul's governor.

The airport is the third-busiest in Europe and 11th-busiest in the world, according to Airports Council International. As of early Wednesday, no group had claimed responsibility for the attacks.

However, experts say they match the M.O. of ISIS, and the Turkish prime minister told reporters early Wednesday morning evidence suggests ISIS was behind the attacks.