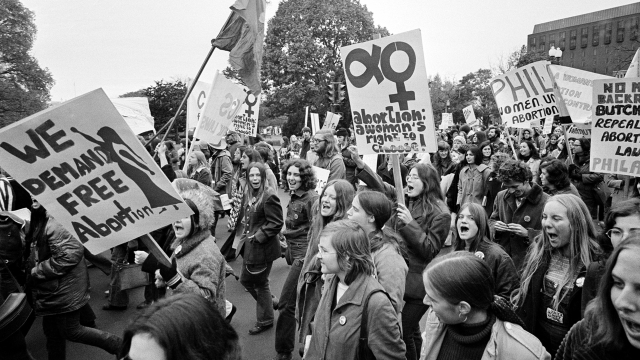 It was an era of protest and revolution, and former pastor Barbara Gerlach was fresh out of seminary.

"I am very much a child of the '60s," she said. "I was drawn to the issues of justice and making change, and many of the people who were involved in that work were people who came out of faith traditions."

Gerlach's desire to restore justice led to something that was sort of a legal gray area at the time. In the years leading up to the Roe v. Wade decision, abortion was illegal in most states, which meant traveling to obtain one or finding an underground source to assist.

"I decided that one of the things I could do was join clergy consultation service," Gerlach said.

The clergy consultation service began in 1967 in New York. Early members were pastors and rabbis who referred women to abortion providers they deemed safe. After abortion was legalized in the state in 1970 their work continued, expanding across the country.

"I want to make clear it wasn't abortion counseling," Gerlach said. "It was options counseling helping a woman look at her options, which could be abortion, adoption."

She joined the movement hoping to refer women to safer options after hearing a classmate's experience with a so-called back-alley abortion clinic.

"She was given an address, a code number," Gerlach said. "She went to a brownstone where she didn't, you know, didn't know anyone. She was met by a doctor in a mask who did the procedure quickly without speaking a word to her."

According to CDC estimates, about 39 women died from self-induced or illegal abortions in 1972. OB-GYN Dr. Joia Crear-Perry says women would find a way.

"People took tinctures, they took medications, but they also had access to providers and doctors who would come to them quietly," Crear-Perry said. "Sometimes people were doing it themselves."

Gerlach says most of the women she counseled in her town of Scranton, Pennsylvania, were religious, too. She remembers their stories.

"Her husband was alcoholic and beat her when he was angry, and she was in the process of going through a divorce, and she did not think she could go through a pregnancy and take on the care of a new life," Gerlach said.

But Gerlach wasn't the only person of faith involved in the movement; an estimated 3,000 clergy members joined.

"As faith leaders who were committed to the care of our communities, that this is part of our sacred calling is to make sure that they're safe and cared for," Katey Zeh, Religious Coalition for Reproductive Choice CEO, said. "And so I think for them, it was just — it was about really providing practical help."

But abortion was viewed differently by others in the faith community.

Carol Tobias, president of the National Right to Life, says her group was pivotal in galvanizing Christians who wanted to stop the legalization of abortion.

"Back then there were as many pro-life Democrats as there were pro-life Republicans," Tobias said. "It was in 1970, National Right to Life actually had a meeting where they asked people from around the country to come together to talk about the efforts, thinking that if they could share ideas and thoughts and activities possible, you know, lobbying ideas, that they could basically stop these efforts. And in some states, they were successful, and in many, they were not."

Meanwhile, another group was working to find their place in the movement: Black women.

While some, like Dr. Mildred Jefferson — the first Black woman to graduate from Harvard Medical School — went on to lead National Right to Life. Others, like a young Shirley Chisholm and Byllye Avery, spoke out about the need for abortion access for all.

"We are less likely to have had access to any kind of provider that was our regular doctor," Crear-Perry said. "And so, to have the resources, someone to say, 'Hey, I would like to have an abortion, who would that have been?'"

Crear-Perry says Black women faced an inability to travel and a history of medical and societal mistreatment. There was also a growing debate in the community on whether abortion was a form of Black genocide. Black women who did seek abortions often found them in places that were unsafe.

After the 1973 decision, the work accelerated on all sides of the debate. Three years later, the anti-abortion movement succeeded with the passage of the Hyde Amendment, a measure that restricted taxpayer-funded abortions. For abortion rights advocates like Gerlach, there was much to do. She continued to refer women to safe facilities and advocates worked to open more, accessible options for all.

While the times and the faces may have changed, some things remain the same, as history repeats itself, and the future of abortion once again returns to the high court.