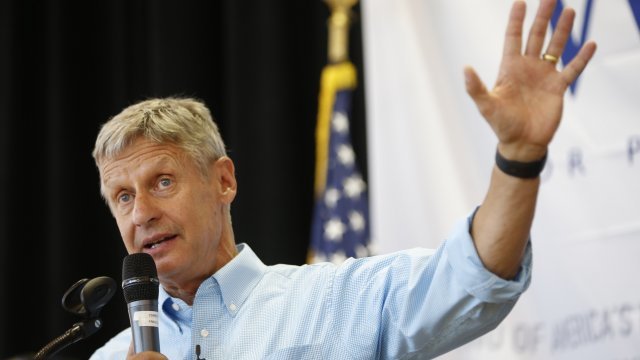 By Andrew Rafferty
November 1, 2018
Third-party candidates don't need to win to have an impact. And Indiana Libertarian Lucy Brenton might be the best example of that in 2018.
SHOW TRANSCRIPT

Third-party candidates will appear on the ballot in key races across the country November 6.  Among them will be independents, members of the Green Party, and Libertarians.

Most will earn just a small fraction of the vote. But some could earn more than that. Enough that — even if they don’t come out on top — they'll have a real impact on key races.

Polls show Democratic Sen. Joe Donnelly and Republican Mike Braun locked in a close race that will be key in determining which party wins control of the Senate.

They also show Brenton getting a notable share of the vote.

"A lot of people say: Aren't you going to be the spoiler? Aren't you causing one or the other to lose? No there was always going to be a loser in this race, now there will be 2 losers," Brenton said. "But here's where the messaging is. My job as a candidate, that is campaigning for liberty, for your freedom, is to show the second loser that the reason that they lost is because their messaging is off. Their execution is off."

It's significant enough that the Indiana Democratic Party actually sent a mailer in support of Brenton as part of an effort to siphon votes from Braun. A party spokesman did not return a request for comment about the ads.

"If we assume that most Libertarian candidates are pulling votes away from the Republican Party, if Sen. Donnelly wins by 2, 3 points, and the Libertarian candidate is getting somewhere between 5 and 10 points, if those people would have voted, and voted Republican, then ya, those people could absolutely make the difference," said Butler political science professor Greg Shufeldt.

But Brenton says she doesn't see herself pulling from one party more than the other — and many of her supporters would simply stay home if she wasn't on the ballot.