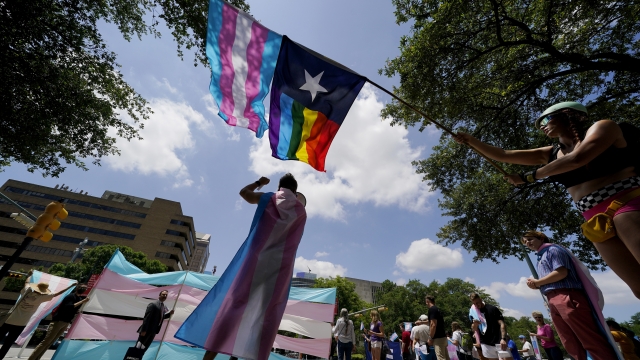 A Texas judge has halted the state’s investigations into families of transgender children. LGBT advocates say that directive was motivated by conservative bigotry against the trans community and in no way rooted in law.

One advocate, Mandy Giles, displays an all-inclusive flag outside her home.

“We put this outside of our house 365 days a year because we’re proud of our children," she said.

The flag represents the lesbian, gay, bisexual, transgender and non-binary communities. Giles has two grown non-binary children, and she says the state of Texas is causing families like hers deep emotional distress.

"Families are scared, not knowing whether it's safe for their children to even leave the house with gender affirming clothing," Giles said.

Texas’ attorney general issued a non-binding legal opinion that targets the parents of trans minors who have received treatments, including surgery to match their gender identity, and equated it with child abuse. He and Texas governor Greg Abbott say such procedures harm children. The opinion is in direct contradiction to every major medical association which recognize the medical necessity of transition related care for improving the physical and mental health of trans people.

But Indigo Giles, Mandy’s non-binary adult child, says people like them are being treated like political footballs.

"I truly feel like I, and my community, are being used as pawns in a game for re-election. Like, they're pretending that they care about the kids. They don't," Indigo Giles said. "If they would, they would leave us alone. It's all just a power grab."

Governor Abbott went a step further, ordering the Department of Family Protective Services to investigate parents of trans children. The department confirmed to Newsy there are nine active investigations.

“The persecution of transgender kids, and the people who love them, is fundamentally wrong," said Ricardo Martinez, chief legal counsel for Equality Texas.

At a news conference outside of family protective services Friday, LGBT rights advocates called the governor’s decision life-threatening to the trans community.

“It’s criminalizing parents who are doing their best to keep their kids alive in a state that tells trans people like me that we are not worthy, we should not be alive, our lives are not of any value in the state we love that we call home," said Emmett Schelling, executive director of the Transgender Education Network of Texas.

"This is not a snap decision for anybody," Indigo Giles said. "You know, you can't just up and decide that this is what you're going to do, and then get it done."

Giles says growing up in a loving supportive home of unabashed pride is why they’re here today.

"This is the love that we have in our house, but it's also kind of like a beacon for people who come over that like this is a safe place, is a place you can be yourself," Indigo Giles said.